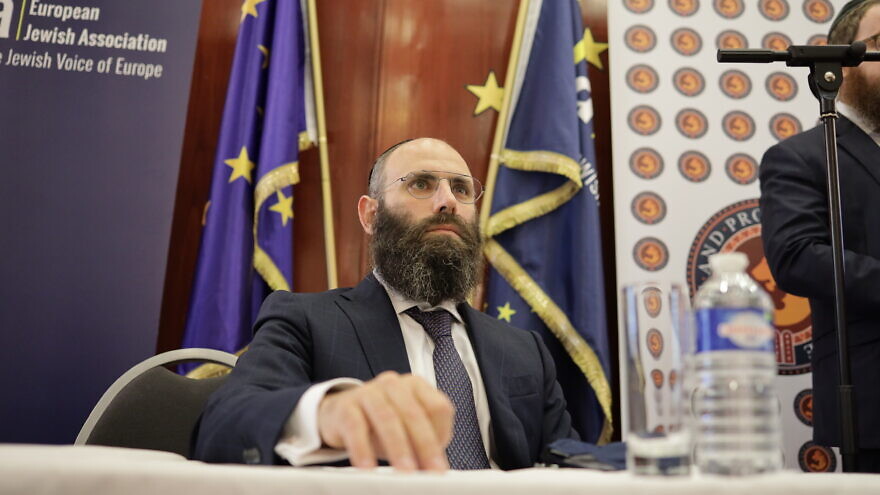 (October 15, 2021 / JNS) “We weren’t supposed to be here,” claimed Rabbi Menachem Margolin, chairman of the European Jewish Association (EJA) at the opening of the EJA Conference of Jewish Leaders in Brussels held on Oct. 12-13. “Anti-Semitism was supposed to just be a topic in Europe’s history curriculum … but history repeats itself,” he said.

Indeed, 82 years ago to the day, Jews from Vienna were expelled to German Nazi camps in Poland at the beginning of the Holocaust. A year later, the Nazis ordered the building of the Warsaw Ghetto, from where thousands of Jews were deported to Nazi extermination camps.

“Today, 82 years later, we gather in Brussels with Jewish leaders from Europe and watch, in front of our eyes, how anti-Semitism continues to grow year after year,” exclaimed Margolin, who placed blame on politicians “who are content with declarations but ignore the real problems of the Jews of Europe.”

“Our kids are not supposed to hear that they are dirty Jews in the streets. Our community shouldn’t need to fight for the right to consume kosher food,” he added, referring to some regions of Belgium that have recently outlawed kosher slaughter. “Our communities need not worry about the security of its Jewish institutions, and the Jewish community does not need to watch how Nazi symbols, representing the biggest traumas of our people, are sold in auctions to people for whom Hitler is a source of inspiration.”

“Today, we launch a parliamentary group for each parliament in Europe to combat anti-Semitism,” he continued. “On the day after Columbus discovered America, we hope to discover a new Europe—one with a moral commitment to ensure the continuity of Jewish life here in Europe.” 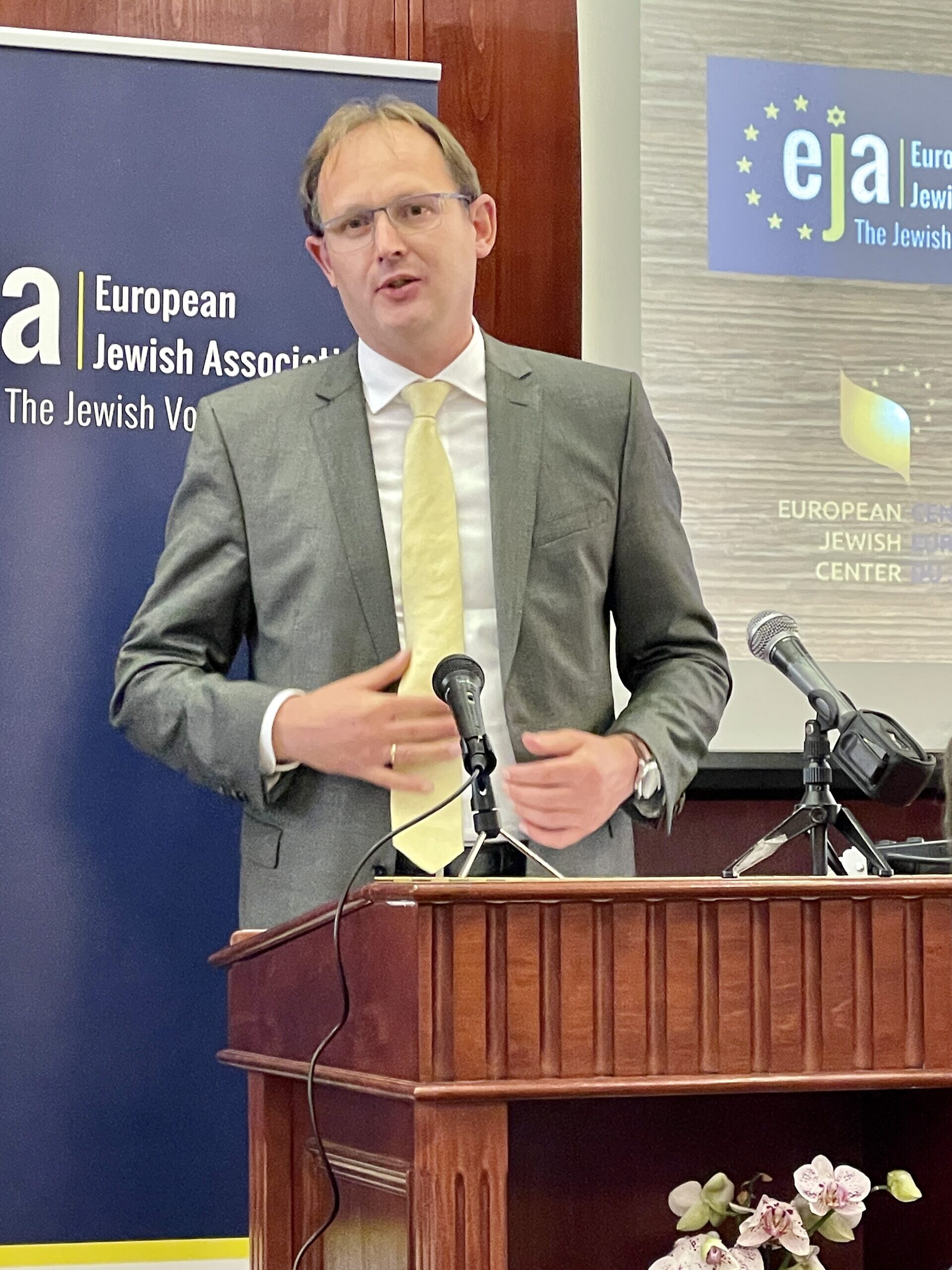 “It is time to take an active role in forming our fate in Europe,” stated Rabbi Shlomó Köves, chairman of Europe’s Action and Protection League (APL) and leader of the Chabad-Lubavitch Association of Hungarian Jewish Communities (EMIH), who unveiled a new survey and an integrated database on the disturbing levels of prevalent anti-Semitism across 16 European countries at the conference.

Where regional anti-Semitic trends exist, he told JNS, regional cooperation is necessary. “We Hungarian Jews have important know-how in last 15 years that we can share with fellow communities in Europe,” he said.

Member of European Parliament from the Netherlands Bert-Jan Ruissen, also a Dutch Parliament member and vice chair of the European Parliament Delegation for Relations with Israel, told JNS of the challenges in advocating against anti-Semitism and anti-Zionism in European parliaments, where calls for BDS and growing anti-Semitism are too common. Ruissen is especially critical of funding by the European Union to Palestinian NGOs that support terrorist organizations and publish anti-Semitic, incitement-filled schoolbooks. “Sometimes, I get the impression that Europe does not want to learn the lesson to be learned from the Second World War and Holocaust,” he said.

European Commission Vice President H.E. Margaritis Schinas reflected on a pledge she made to the European Jewish community last year: “I made a promise to reinforce our efforts to combat anti-Semitism in all its forms, to support communities and to foster Jewish life in all its diversity. Last week, I was proud to present the E.U.’s first strategy on combatting anti-Semitism and fostering Jewish life. We will prevent all types of anti-Semitism, including Israel-related anti-Semitism, which is the most common form, using all the tools at our disposal. We know that Europe can only prosper when its Jewish communities can prosper, too.” 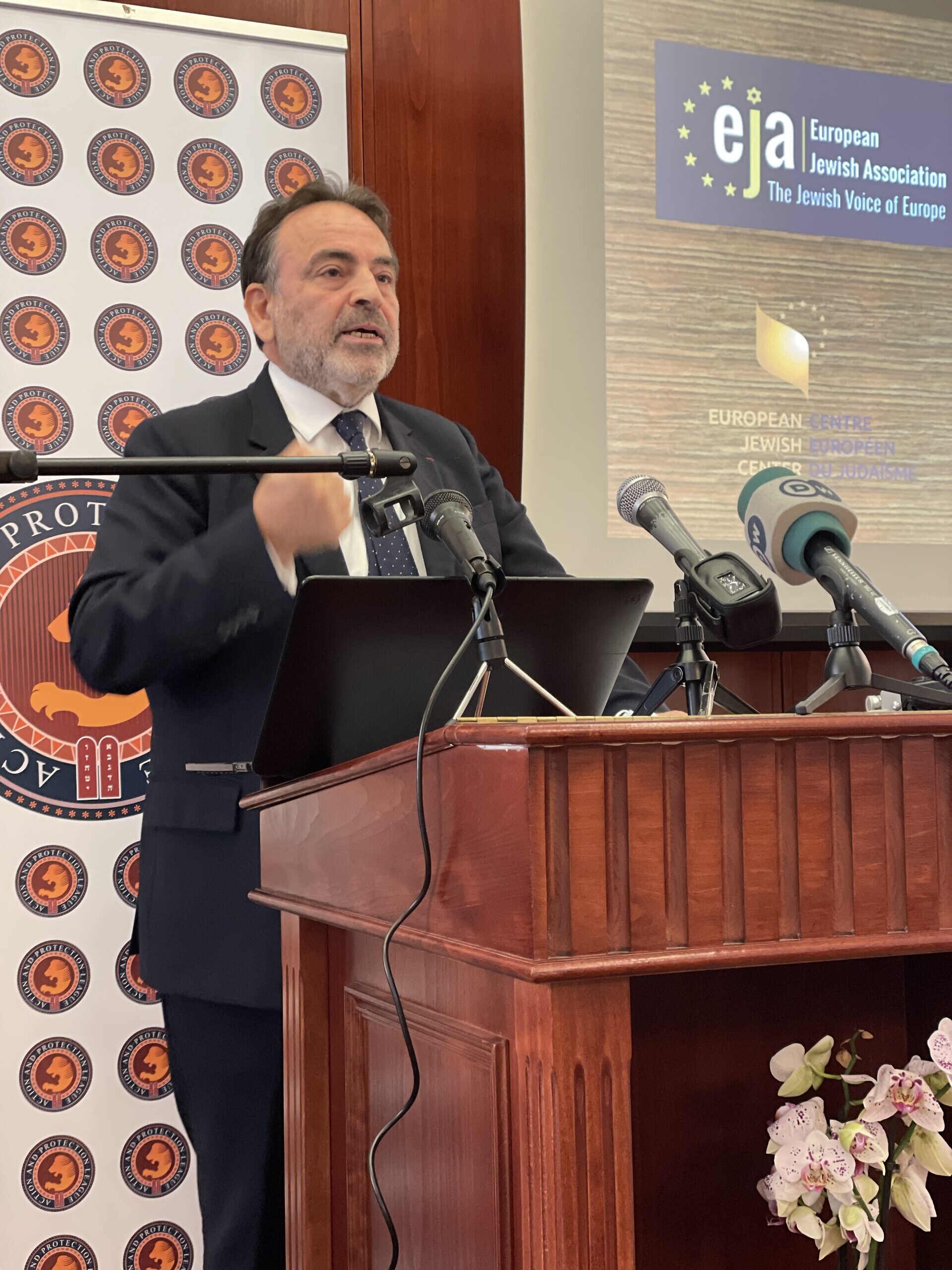 Joël Mergui, president of the Consistory of France and Paris, and the European Center for Judaism. Photo by Eliana Rudee.

Joël Mergui, president of the Consistory of France and Paris, and the European Center for Judaism, commented, “One thing is certain, while the European institutions and politicians devote significant resources and spare no effort in the fight against anti-Semitism, the situation in Europe is not improving. Freedom of religion for Jews is a barometer of general freedom, if Jews can fully experience their identity, so can everyone else.”

Israel’s President Isaac Herzog, who addressed the conference from Jerusalem, said, “Europe faces an unprecedented challenge with the coronavirus. At the same time, the plague of anti-Semitism continues to spread on the street and online. We continue to see threats to Jewish religious and cultural life in Europe including calls, legislations and judgments that support a ban on Jewish circumcision and productions of kosher meat. I urge all of you to use all tools at your disposal to ensure that European Jews can live an open, free and secure Jewish life. Israel will always be a home for you and will always be by your side.”

10-point plan to be taken up by parliamentary groups

The conference also saw the publication of a 10-point plan, dubbed “the 10 commandments” by the EJA, to eradicate anti-Semitism and the establishment of parliamentary working groups to drive this process forward.

The plan, which will be taken forward by parliamentary working groups from across Europe, encourages member states to safeguard the right of Jewish people within the E.U. to practice religious customs such as kosher ritual slaughter and circumcision as fundamental rights.

It urges the countries to promote educational initiatives that underline that anti-Semitism has no place in a modern and tolerant Europe.

The plan also allocates an E.U. budget for the maintenance and support of Jewish educational facilities and places of learning.

Fourth, it encourages member states to support security for Jewish institutions and buildings, and increase this support at times of heightened tensions.

It urges countries to pressure social-media companies to act faster and more decisively on hate speech by imposing punitive and serious financial penalties when such content lingers.

The plan encourages member states to root out and ban NGOs and/or other associated groups that promote, support or tolerate anti-Semitism according to the International Holocaust Remembrance Alliance (IHRA) working definition of anti-Semitism.

It promotes legal safeguards against the BDS movement against Israel at European and national levels.

Lastly, it bans the sale of Nazi memorabilia at auctions and on websites for private individuals or entities not directly involved in educational facilities such as universities or museums.