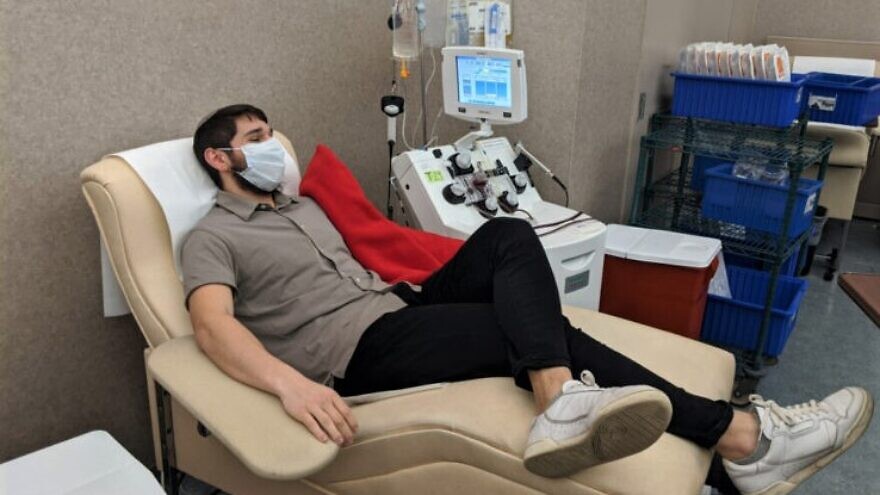 (April 8, 2020 / The Dayton Jewish Observer) Mendel Mangel and his brother, Lazer Mangel, of the Crown Heights neighborhood in Brooklyn, N.Y., drove to their hometown of Dayton in mid-March to get away from the COVID-19 surge about to hit the New York area.

But he had no idea that it had already hit him.

Now, as the Mangel family prepares to sit down for its Passover seder, Mendel is in the clear from the coronavirus—and has become the first person to recover from the disease to donate plasma in Montgomery County.

Mendel donated his plasma on pril 6 at the Community Blood Center under the auspices of the new Dayton COVID-19 Convalescent Plasma Project, comprising the Dayton area’s hospital systems, working with the federal government.

Rabbi Nochum Mangel, who directs Chabad of Greater Dayton with his wife, Devorah, described the past three weeks in their home as “an emotional roller-coaster.” 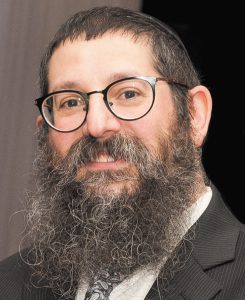 He had already brought his parents, ages 86 and 81, from Crown Heights to live in his home in Oakwood on March 15 in fear for their health. Mangel’s father, Rabbi Nissen Mangel, is a survivor of Auschwitz. Both, Mangel said, have no underlying health issues.

“This was before they closed anything in New York,” said Mangel.

The next day, Mendel and Lazer called him. “My kids said, ‘We’re going to be locked in our homes, everybody’s working from home, and it’s going to be quite lonely, so we would like to come home, too.’ We told them, ‘You guys can come home, but understand that you’re going to be quarantined because you were exposed to people that have been found to be infected.’ ”

Before there were coronavirus preventative measures in Crown Heights, said Mangel, the brothers celebrated Purim and Shabbat there. Crown Heights is the epicenter of the Chabad-Lubavitch movement.

“Everyone in New York was just assuming they were exposed,” said Mendel, 20, who works in marketing for an online skin-care company.

After arriving at his parents’ house, Mendel started getting mild symptoms: a headache and some aching. With the grandparents in the house, the Mangels took Mendel and Lazer to be tested March 19 for COVID-19 at the University of Dayton.

Four days later, the results came back that they were both negative.

“The thinking was there’s no real reason that they have to remain quarantined,” said Mangel. So the brothers came up and joined the family.

But after three days, on March 26, the Mangels’ family physician, Dr. Martin Schear, called. The testing lab had just called him; Mendel was positive for COVID-19.

“What do you do now?” asked Mangel. “Now, he was around all of us, but he had no symptoms already for a week. We sent him back to the basement.”

The whole family went under quarantine. All took the test for COVID-19 at UD. All came back negative on April 6.

‘Collect plasma from donors who meet the requirements’

While making the rounds calling people connected to Chabad, Mangel learned of an opportunity for Mendel to help save lives of patients severely ill from the coronavirus.

He spoke with a Jewish physician who happened to be associated with the Dayton COVID-19 Convalescent Plasma Project. The doctor told Mangel of an obstacle facing the plasma project: The doctors hadn’t yet identified anyone in Montgomery County who had COVID-19 and was cured.

“I told him I think I have one in my basement,” said Mangel.

As it turned out, Mendel’s blood type is AB+, the universal plasma donor.

He went to Miami Valley Hospital’s emergency room to get tested April 6. About two-and-a-half hours later, they told him he was negative for COVID-19.

That afternoon, Mendel arrived at the Community Blood Center to donate plasma.

“I was told that it’s going to two people, and that they started,” he said. “All the doctors here are working so hard. Every single doctor and nurse that I’ve come across since this thing started is absolutely doing the hardest work to make this as fast as possible.”

Plasma has been used in emerging viral infections for which a treatment hasn’t been identified. The plasma of the person who has recovered from a virus has antibodies to fight the virus; with this project, it is infused into people who have severe COVID-19, to help battle the infection. 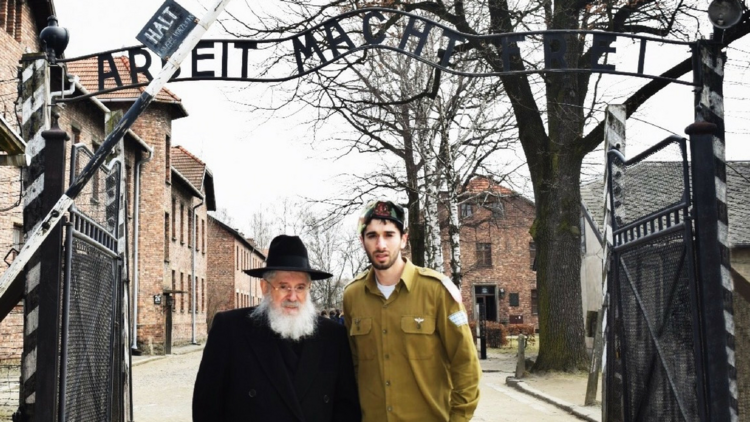 In a statement to the Dayton Daily News on April 6, Community Blood Center medical director Dr. James Alexander said it aimed to have this plasma program fully up and running by the end of this week.

“Once in place, we will collect plasma from donors who meet the requirements,” he said in the statement. “There is some evidence it may benefit some patients. There is very little evidence that it is harmful.”

Mangel said the rabbi in him sees this as a lesson in Divine providence.

“Hashem (God) orchestrates everything, and we are all pieces in God’s master plan,” he said. “It teaches how vulnerable humanity is, and really, how little we know. So all of the frustration, all is used for a positive that now Mendel can help someone’s life.”

“Thank God our immediate family is safe,” Mendel said. “My family’s not even close to the worst of this, but I have plenty of friends with parents that were in the hospital, grandparents that were in critical condition. One of my friends had an uncle pass away, another one of my friends, his grandfather. We’re nowhere near the epicenter of it here.”