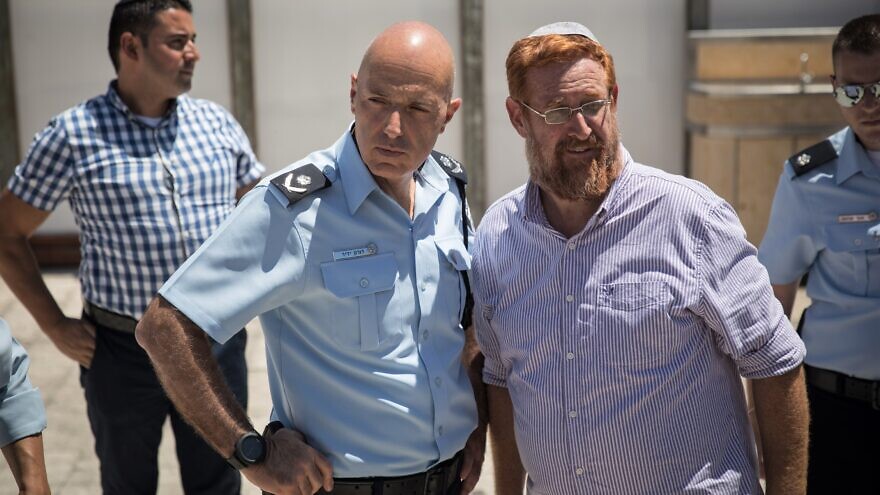 Commander of the Jerusalem District Police Doron Yedid with former Knesset member Yehuda Glick at the Western Wall Plaza near the Mughrabi Bridge in the Old City of Jerusalem after clashes broke out on the Temple Mount and around its gates, as Jews mark Tisha B'Av and Muslims celebrate Eid al-Adha, on Aug. 11, 2019. Photo by Hadas Parush/Flash90.
Republish this article
797 WORDS
Spread the word.
Help JNS grow!
Share now:

(February 21, 2020 / JNS) Former Knesset member Yehuda Glick was arrested three times over the course of a 24-hour period this week, accused by police of carrying out provocative behavior on a visit to the Temple Mount in Jerusalem. He was subsequently charged with disrupting court procedures by stealing investigative materials from a police investigation room.

Glick told JNS that the incident epitomizes the fact that non-Muslims are currently discriminated against at the holy site.

“Due to the demands and threats of radical Islamists, the Israeli authorities discriminate against non-Muslims on the Temple Mount,” he said. “A non-Muslim has very limited access, for limited hours, and cannot openly pray nor ascend with a Bible in hand. It is about time we stop giving in to terror and turn the Temple Mount into the house of prayer for all nations!”

The episode began on Tuesday after Glick led a delegation to the Temple Mount that included U.S. Reps. Jim Jordan (R-Ohio) and Mike Johnson (R-La.) who were touring Israel with the Yes! Israel Project. After the tour, Glick went back up to the site by himself and was apprehended by several police officers.

While police claim that he was detained for “provocative behavior,” Glick, who goes to the site on a weekly basis, says that on this visit, a police officer who accompanied him (Jewish visitors are forbidden from exploring the Mount on their own) accused him of walking “too slowly.”

Israel Police Foreign Media Spokesman Micky Rosenfeld told JNS that after the congressmen’s visit had wrapped up, Glick “came back on his own to the Mughrabi Gate area and entered the Temple Mount without coordinating with the police and against the rules.”

Rosenfeld added, “Police approached the visitor, who did not listen to the police orders and continued with his provocative behavior. Police responded by detaining the visitor and removing him from the scene. He was arrested and handcuffed out of the area and questioned.”

He emphasized that Glick has been instigating issues over the past several months during other visits.

Following his release on Tuesday, police went to Glick’s home around midnight with a search-and-arrest warrant, claiming that he had taken materials related to the investigation during his interrogation.

“It was suspected that he had stolen investigative material from the police investigation room,” reported Rosenfeld. “Based on those suspicions, police turned to the court and requested to carry out a search of the suspect’s home. Police arrived at his home and searched the area. The suspect was detained for questioning and then released under conditions.”

Glick was again arrested the next day, Feb. 19, and taken to the Jerusalem Old City police station for further questioning.

A press release issued by Glick’s Shalom Jerusalem Foundation after his subsequent release on Wednesday morning asserts he was threatened by police. The statement said Glick was warned at the police station, “If you continue to slander the police, we will dig up dirt on you.”

In regard to accusations that he tampered with police evidence, the release continued: “The police are blowing way out of proportion something which at worst was a human error in order to demonize Glick, all to cover up the severe discrimination it practices against Jews on the Temple Mount. We will not allow the police to divert the public’s attention from the real issue at hand; the humiliating attitude that the police too often applies to Jews on the Temple Mount.”

While non-Muslims currently have a legal right to worship on the Temple Mount, police are allowed to overrule that decision based on their judgment in order to keep the peace. For years, they have been enforcing a policy that does not allow Jewish worshippers (and other non-Muslims) to pray or make any gestures resembling prayer, the penalty of which is possible arrest or being banned from the site.

The “Peace to Prosperity” plan released by the Trump administration seeks to address some of these issues, stating that “Jerusalem’s holy sites should remain open and available for peaceful worshippers and tourists of all faiths. People of every faith should be permitted to pray on the Temple Mount/Haram al-Sharif in a manner that is fully respectful to their religion, taking into account the times of each religion’s prayers and holidays, as well as other religious factors.”

Glick’s zeal for the Temple Mount nearly cost him his life. In 2014, a terrorist associated with Islamic Jihad shot him in the chest four times as he was exiting Jerusalem’s Menachem Begin Heritage Center after addressing a conference as spokesperson for the Joint Committee of Temple Organizations.

Despite his near fatal wounds, Glick recovered and went on to become a Likud Party member of Knesset.