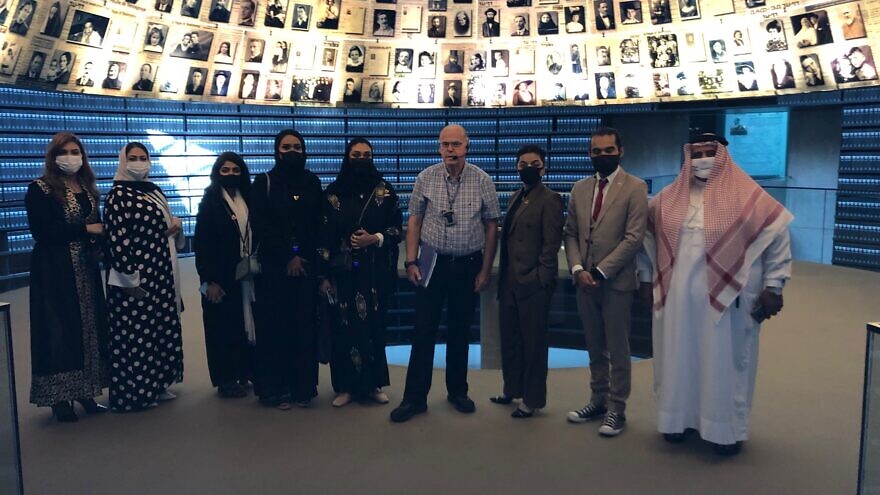 (October 8, 2021 / JNS) A group of nine Muslim Bahraini high-level influencers arrived in Israel this week for an eight-day tour throughout the country organized by the Sharaka organization.

Sharaka, which means “partnership,” in Arabic is dedicated to utilizing the Abraham Accords as the springboard to bring Israelis and Arabs from Gulf Nations together in order to build strong ties, cooperation and mutual understanding.

Sharaka leads interfaith delegations of young Israelis to the Gulf, as well as brings delegations of Emirati and Bahraini influencers to Israel to learn about Israeli culture and history.

JNS caught up with the group on their second full day as they visited Jerusalem, arriving at Yad Vashem, Israel’s official memorial to the victims of the Holocaust, with a guide leading the group through the museum in Arabic, and later, for a culinary tour at the Machane Yehuda outdoor market in the center of town.

While in Jerusalem, the group was also slated to meet with government officials at the foreign ministry and visit various holy sites before exploring other cultural, religious and historical places throughout Israel during the rest of their whirlwind trip.

Some of the group members were dressed in traditional Bahraini Muslim attire, with the men wearing the thobe (robe-like apparel) and ghutra (headscarf), while some of the women wore the abaya (long dress) and hijab (also a headscarf). At the same time, others wore standard Western attire.

Inside one of the final exhibits at Yad Vashem, which displays the horrifying scenes of at the death camps upon liberation by the allied powers, influencer Khawla Al Shaer was so troubled by the images of Nazi atrocities committed against the Jewish people she had to leave the room.

She told JNS “When I see humans harming other humans—no matter what nationality, ethnicity, religion background—it’s unbearable.” She said that she had been educated about the Holocaust in Bahrain, but “to hear it from those who experienced it and to see those images gives you a different perspective and understanding, and touches you deeply.” 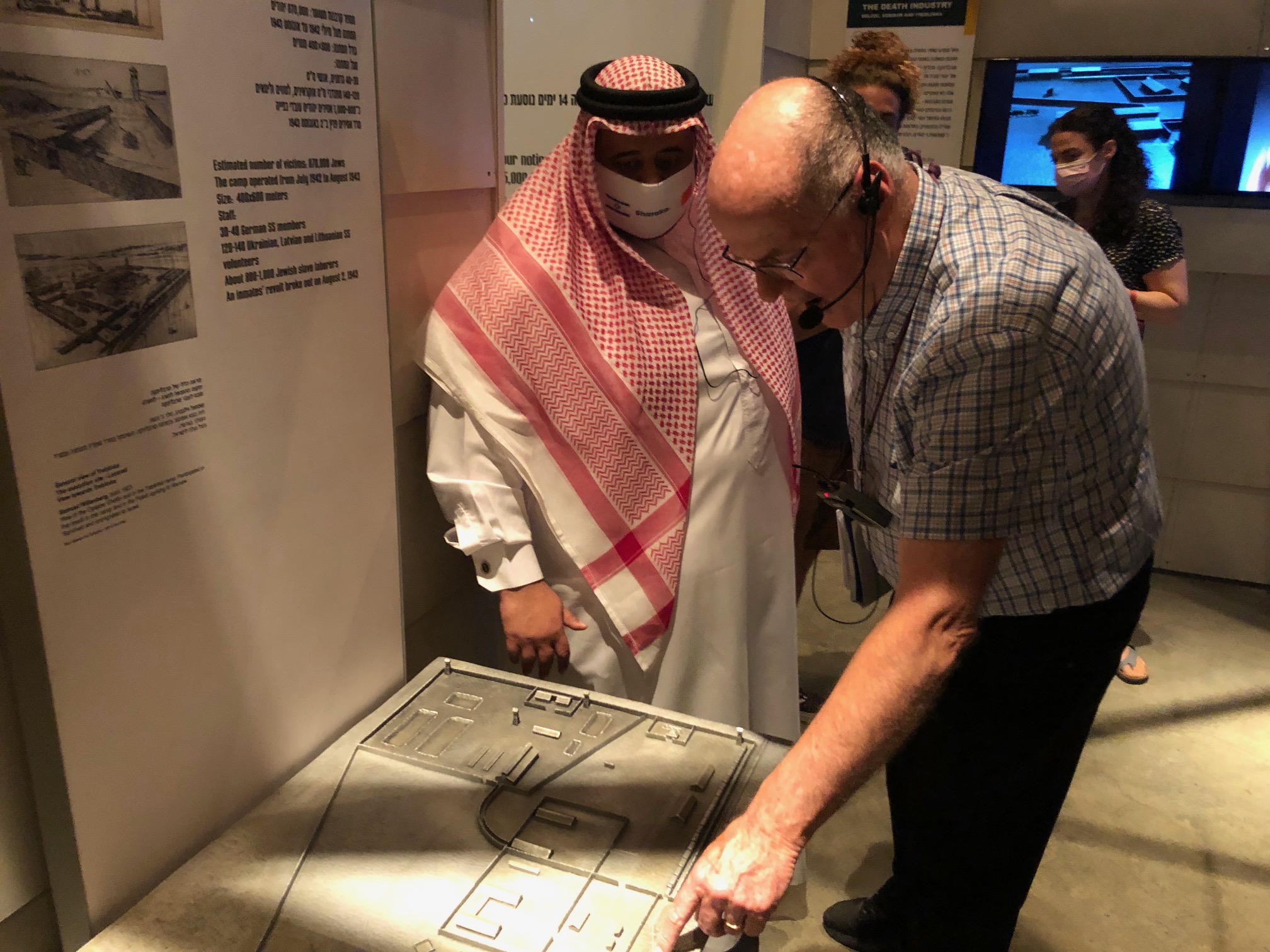 Members of the Bahraini delegation view an exhibit at Yad Vashem in Jerusalem, October 2021. Photo by Josh Hasten.

Visiting Israel for the first time, Al Shaer said that she was “told a lot about Israel, but being given the opportunity to visit and talk to the people is different than hearing it secondhand.”

She added that “while the media says a lot, being in the place itself helps you understand more and gives you the perspective from those who live here. I’m so looking forward to learning more about this country.”

‘We have to take it to the civic level: people to people’

Ahmed Muhammad, a highly successful Bahraini businessman who was visiting Israel for the second time, expressed his feelings to JNS at the exit of Yad Vashem.

“What we saw today was a dark side of history that we should understand and comprehend in order to avoid this in the future, so that we build a better tomorrow for everybody, for ourselves, our neighbors and our friends,” he said.

Switching to the subject of the newfound normalization between Israel and Bahrain, Muhammad said “the Abraham Accords won’t affect the lives of the average Bahraini immediately since they took place on an official level.”

However, he said, “now we have to take it to the civic level—people to people. That’s why we have to get to know each other as people in both countries and understand our aspirations, and so far, I see that we aspire to the same goals; everybody wants peace, to work, to raise their kids in a safe environment without discrimination where there are equal opportunities for all.”

Muhammad said he felt warmly welcomed by the Israeli people. “From the first minute, from the airport, everyone is welcoming—everyone is asking if there is anything they can do to help, and most importantly, with a big smile.”

Peace activist Fatema Al Harbi, vice chairman of Sharaka in Bahrain who was in Israel on her second trip, echoed Muhammad’s sentiments to JNS about Israeli hospitality. “I love Israel; it feels like home. The people are so friendly and so welcoming.”

She also agreed with Muhammad that the accords will take time to kick in.

She believes that when the Abraham Accords were launched, they were accepted in Bahrain but at a much slower pace than in the UAE (United Arab Emirates). But now a year has passed since the accords were signed, the country and its people are getting on board. 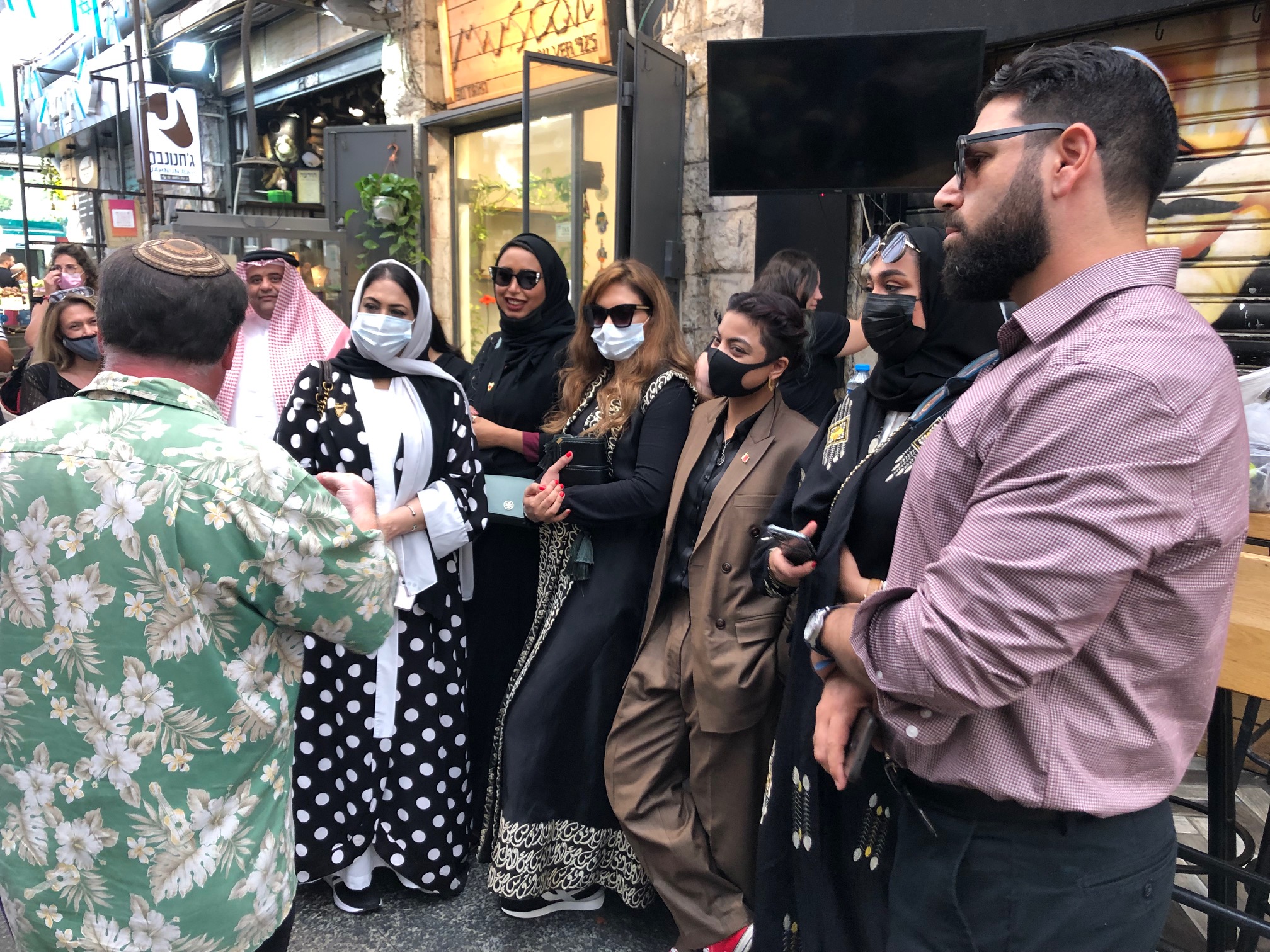 Al Harbi said the accords “faced criticism at the beginning, but today, more and more people accept hearing about Israel or Tel Aviv or Jerusalem.”

She thinks more and more conversations about Israel in Bahrain on social media helped bring about a change, and she views her UAE friends as a huge support system in working to build Israel ties.

Al Harbi added that “the importance of Sharaka is that it allows us to have a voice in Bahrain. Before the Abraham Accords, nobody dared to talk about Israel or peace, but we normalized the topic. Now you can see the Israeli flag featured on our social media or hear songs in Hebrew. We’re part of the normalization. There is the government but we are the people, and more are joining us day by day.”

‘Too many decades of not knowing each other’

Stepping off the minibus at the Machane Yehuda outdoor market, the group members wearing their traditional attire instantly created a buzz. Curious Israeli vendors, along with shoppers and tourists, began mobbing the group, asking for selfies.

Shouts of “Welcome to Israel!” and “We love you!” were heard throughout the visit as restaurant and shop owners tried to persuade the group to patron their establishments.

At the same time, several local Jerusalem Arabs at the market whispered nasty messages of hate under their breath as they passed by, expressing their disapproval of normalization between the two countries. 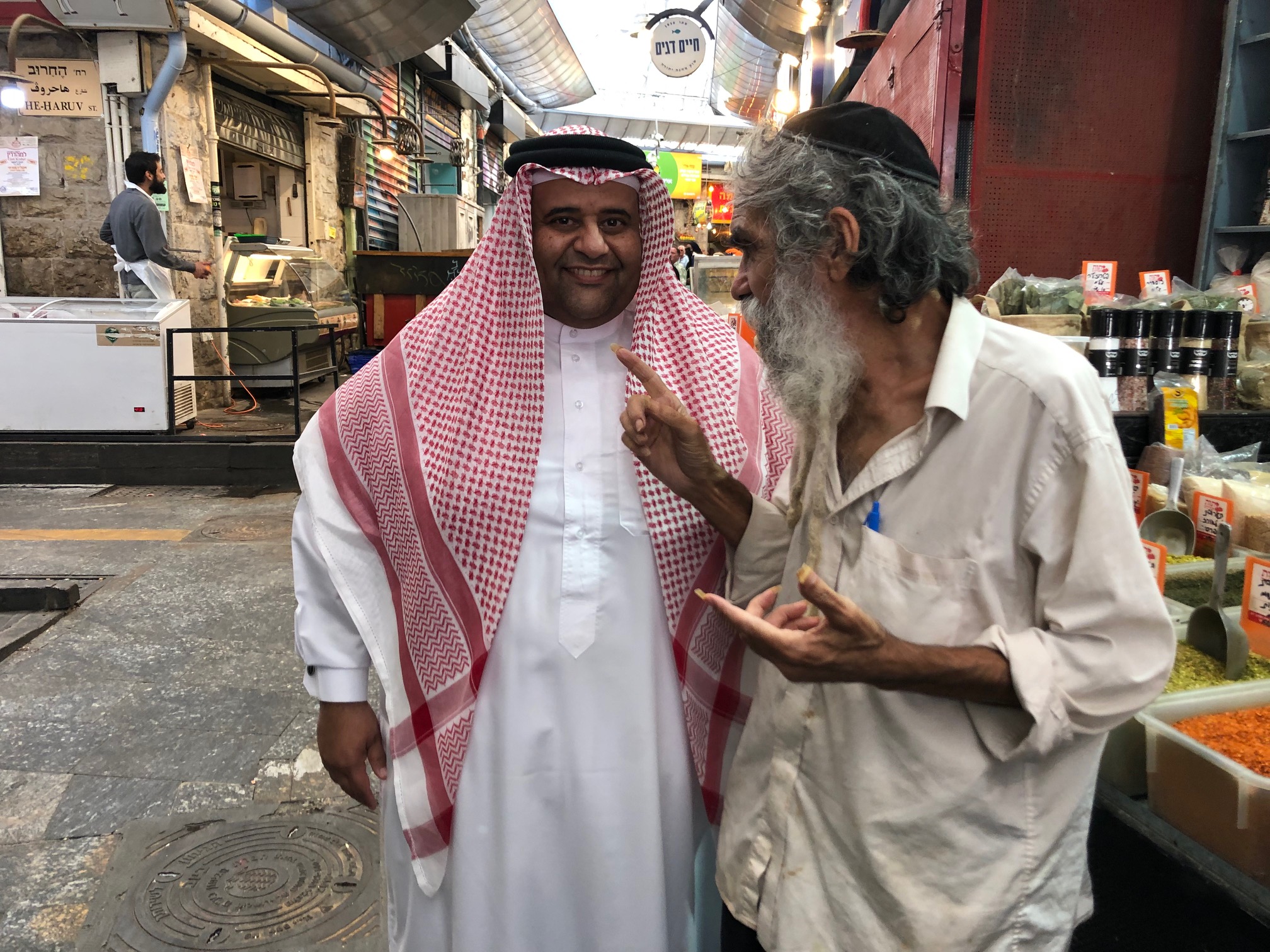 Those messages were ignored, as one of the Bahraini female group members said, “We don’t respond to hate.”

Dan Feferman, director of communications and global affairs at Sharaka who organized the trip, told JNS that the goal of the mission was “to ensure that the peace agreements do not remain only between the governments. There have been too many decades of not knowing each other—of mistrust, of hostility and negative images in the media, and so we want to make sure that this peace becomes a warm peace that is translated to the people. … We want to create as many points of contact and interaction as possible.”

He added that Sharaka “wants to create social entrepreneurship, to connect between entrepreneurs, NGOs, educational initiatives, youth initiatives, sports, culture, etc., and use all of this as a model for the rest of the Arab world to realize that peace and positive ties are a huge benefit for everyone, and that radicalization is not in anyone’s favor.”

“We are connecting these influential Bahrainis to their counterparts here to spur these collaborations that we want to happen. That’s the foundations for peace—when there are concrete collaborations and not just words,” said Feferman.

At the end of the market tour, Muhammad Yusuf Al Shaer, Khawla’s brother and a Bahraini market researcher, told JNS: “My interpretation of peace is not what is written on paper. It’s not what governments agree on as peace; it’s not a treaty. It’s me sitting down with you. You give me your opinion and I give you mine, and we can agree or disagree, and still be able to eat off the same plate, share a common ground and meet again in the future.” 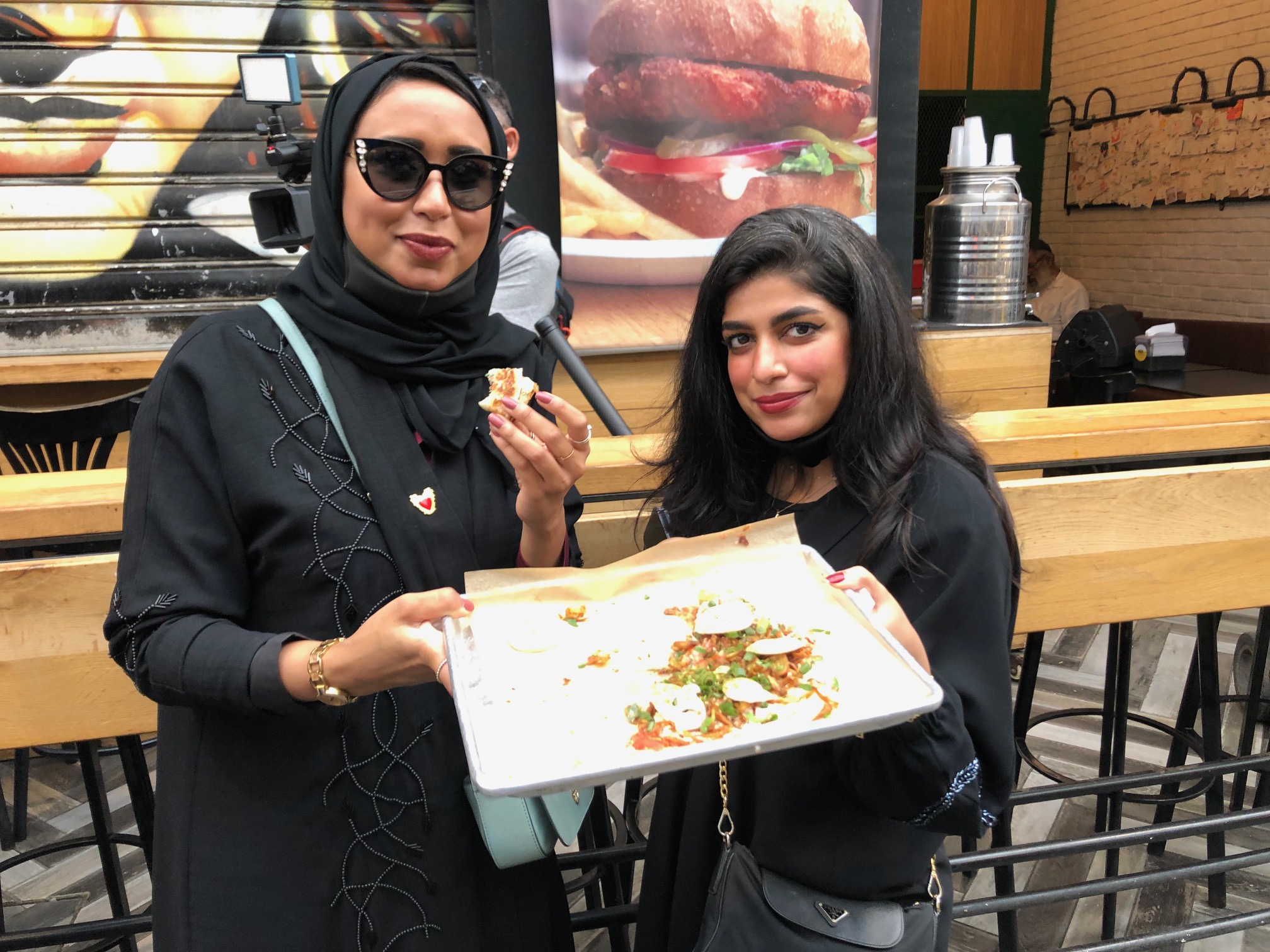 Bahrainis enjoy some food in Jerusalem. Photo by Josh Hasten.
Republish this article in your newspaper or website