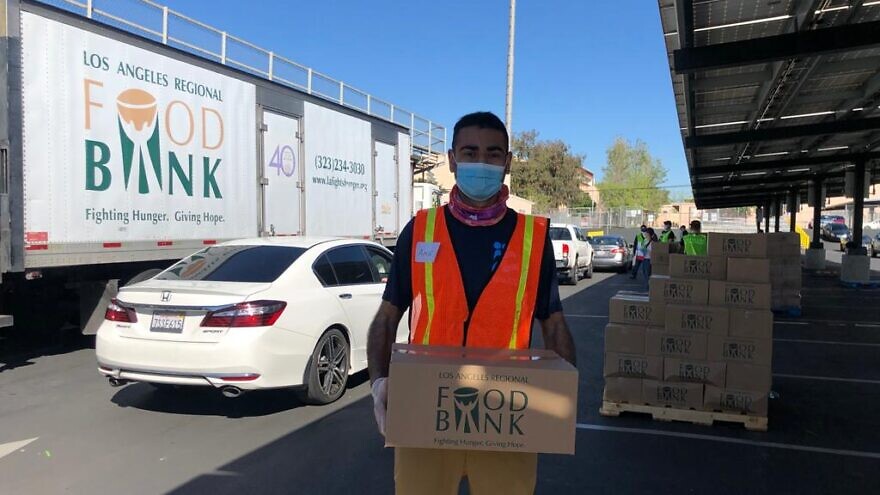 A volunteer with IsraAID humantiarian group works at a Los Angeles food bank as a result of hungry families in need rocked by the coronavirus pandemic. Credit: Courtesy.
Republish this article
461 WORDS
Spread the word.
Help JNS grow!
Share now:

(April 29, 2020 / JNS) IsraAID is expanding its reach from international disaster relief to helping in the United States as the COVID-19 outbreak has seen requests at food banks skyrocket.

“What happened now is an unprecedented disaster in the United States,” said Seth Davis, executive director of the nongovernmental group IsraAID U.S. “We felt it was important to activate our local members. There was a huge gap because food pantries were seeing a decrease in volunteers, and yet there was huge increase in need for food.”

Working with several other partners, including the Merage Institute and Shalom Corps, IsraAID reached out to local community members and asked for volunteers to help pack and distribute boxes of food on behalf of the Los Angeles Regional Food Bank. The boxes are distributed at Los Angeles public schools with parents coming to pick up prepared school lunches for their children. Each box contains enough food to feed a family of four for one week.

Some IsraAID volunteers help in the warehouse sorting food while others are on the front lines of the distribution—putting boxes directly into the cars of families when they arrive to get the food.

According to Davis, in just the first week, “we facilitated 30 volunteers and assisted with the distribution of 21,000 boxes, which feeds approximately 58,000 people. It’s expanding very fast.”

Because many children rely on the Los Angeles Unified School District for both breakfast and lunch, IsraAID asked the Modern Orthodox Pico-Robertson section for assistance.

Flora Glouberman, chair of the Chesed Committee at Young Israel of Century City, has been organizing support initiatives for area residents. When she previously asked for volunteers to shop for the elderly or immune-compromised, she had more helpers sign up than people who needed help.

When she heard about the new food-distribution efforts from her rabbi, Rabbi Elazar Mushkin, she immediately shared it.

“I thought it was a real kiddush Hashem [“sanctification of God’s name”]; there’s a real need to help everybody,” she said. “Whenever there is a crisis, it’s beautiful to see how many are willing to go out and help.”

Los Angeles isn’t the only place where IsraAID is stepping up their efforts. They are also helping with food-distribution programs in San Jose and the San Francisco Bay region, and in San Diego.

The organization is also looking to assist with the emotional impact of the COVID-19 outbreak, particularly in hard-hit areas of New York.

“There will be a high level of trauma that will need to be dealt with, and there has not enough talk about mental-health [issues] that people will endure,” said Davis. “It will take years to bounce back, so we are now assessing which partners to work with so we can do this over the next year.”