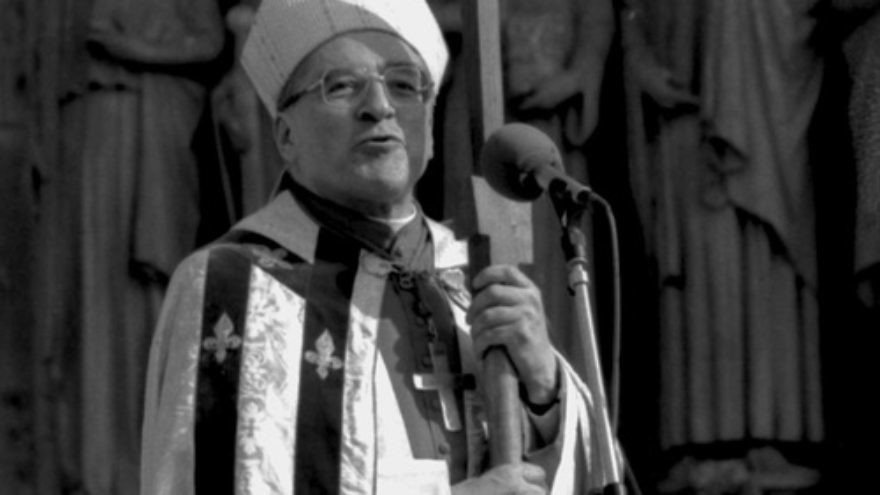 (May 8, 2014 / JNS) Believe it or not, the recently canonized Pope John Paul II had a Jewish Cardinal as an occasional adviser in the 1980s.

The French TV film “The Jewish Cardinal,” which has been receiving a limited release in the United States, follows the crucial years of the life of Cardinal Jean-Marie Aaron Lustiger (played by Laurent Lucas)—the late 1970s through the late 1980s. Those were also crucial years in the history of the Roman Catholic Church.

Born to Ashkenazi parents in mid-1920s France, Aaron Lustiger converted to Catholicism in the late 1930s, taking the name Jean-Marie, and rose up through the church ranks in the following decades. When we first meet him in the film in the late 1970s, he receives the surprising appointment to Bishop of Orléans rather than Bishop of Jerusalem, the position he had hoped for. This brings him into the spotlight, and his part in two religious worlds causes waves in the local Parisian community. His father still has prejudices from World War II; the local newspaper coverage makes more of an issue out of his duality than he would like; and anti-Semitic priests interrupt one of his final sermons before he takes over in Orléans.

Over the years, Lustiger meets Pope John Paul II (played by Aurélien Recoing) on several occasions, advises him on Jewish issues, and rises from Bishop of Orléans to Archbishop of France to Cardinal before passing away in August 2007.

The film’s focus is on Lustiger’s most influential years, rather than his formative years, other than brief flashbacks to two key religious moments of his youth. This allows the film to examine the key issue in the Cardinal’s life: his dual religions. Throughout the snapshots we see of Lustiger’s life, his Jewish roots become controversial—in the eyes of anti-Semitic priests, an outgoing chief rabbi of France, and even Lustiger himself, who calls himself a “token Jew” when he receives his papal appointment. Yet Lustiger disputes the characterization that he is both Jewish and Catholic, much as Jesus was, at the end of the day, a Jew. Lustiger maintains that he is Jewish culturally and by birth, even though he converted to, and practices, Catholicism.

“The Jewish Cardinal” works well as a biographical film and a made-for-TV movie. Its thematic focus, however, results in some gaps, such as a tighter plot or a wider look at Lustiger’s critical years. His internal religious conflict weighs heavily on him, as do the Holocaust-related issues brought up in the film, but his religious duality acts as a loose thread woven throughout the film. The decade or so is accomplished in the hour-and-a-half runtime with abrupt transitions, marked by the occasional passing of a year and slight signs of aging. Lucas has some forceful moments as Lustiger, nicknamed “The Bulldozer” because of his authoritarianism, but the youthful actor doesn’t quite capture the 50 year-old aging Lustiger. This, and the sudden jump forward to 2006 and Lustiger’s off-screen death, noticeably disrupt the viewing experience.

Perhaps focusing on a solitary key issue during Lustiger’s time in the spotlight, or examining more of his life during that decade, would have provided more energy for the plot. But for what it is, “The Jewish Cardinal” is an interesting look at the human side of religion in an age when memories of the Holocaust are still prevalent in Europe.