(November 15, 2021 / Jerusalem Center for Public Affairs) Since the removal of Algeria’s president Abdelaziz Bouteflika in 2019, there has been a notable radicalization of Algerian foreign and security policy, expressed in its approach to its Middle Eastern neighbors, France and the rest of Europe.

The most dramatic development in this area was Algeria’s decision on Oct. 31 to halt all gas exports to Spain and Portugal through the Maghreb-Europe pipeline that crosses Morocco (see yellow pipeline on the map below). Two months earlier, Algeria cut diplomatic relations with Morocco.

The Algerians took this step just as Russia reduced its natural gas exports to Europe, leading to soaring gas prices at the beginning of winter. Russia is a huge source of global natural gas, but Algeria is the fifth-largest natural-gas producer in the world. It is instructive to note that Algeria was cutting gas supplies at a time when it intended to increase its share of Europe’s gas market to over 30 percent, according to Algerian Energy Minister Mohamed Arkab. In essence, the Algerian government was not reducing the share of its gas sector in its overall energy production; it was singling out Morocco and escalating tensions in North Africa as a result.

The present escalation in tensions between the two Maghreb rivals can be traced to 2018 and new Algerian support for insurgents in the Western Sahara that threatened the Moroccan armed forces. It was then that Morocco revealed that Algeria had been assisting the guerrilla forces of the Polisario Front in the Western Sahara region, fighting the Moroccan army and allowing the Islamic Republic of Iran to use its embassy in Algiers as a conduit for arms, funding and training for the Polisario forces. 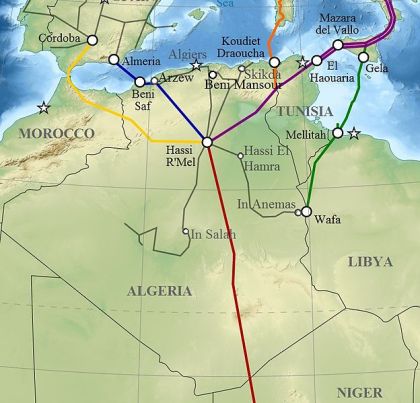 A map showing pipelines across the Mediterranean Sea and the Sahara, the Trans-Saharan, Maghreb–Europe via Morocco (in yellow), Medgaz, Galsi, Trans-Mediterranean and Greenstream. Credit: Wikimedia.

Iran employed Hezbollah for this training mission because its operatives spoke Arabic, while its own special forces were more fluent in Farsi, which the Polisario did not understand. At the time, after Morocco warned Iran that it knew what Tehran was doing in Algeria, Rabat cut off diplomatic relations with the Iranian government.

The Algerians appeared to be reciprocating by suddenly charging that Israel and a “North African country” were assisting a Berber-speaking movement in northern Algeria, known as Kabylia, which calls for self-determination of its population—effectively breaking it off from the Algerian state.

Finally, Algeria closed its airspace to French fighter jets heading to the civil war in Mali, where both Russia and Turkey have been engaged with armed forces. In the war in Mali, jihadist forces were aligned with Al-Qaeda in the Islamic Maghreb (AQIM) in the north and with Islamic State (ISIS) in the south. Keeping allied airpower out of Algerian airspace effectively strengthened jihadist groups in the Sahel (the region south of the Sahara Desert), undermining Western interests.

Algeria’s harder line in regional matters also expressed itself in the diplomatic arena. The U.N. Security Council adopted Resolution 2602 in October 2021, which called for the resumption of consultations between Algeria, Morocco and the Polisario to advance “a mutually acceptable political solution” in the Western Sahara that would be based on a compromise.

Algeria utterly rejected the resolution and was acting in complete defiance of the Security Council. It was noteworthy that the United Nations was not demanding that the parties adopt a particular solution by prejudging the outcome of future negotiations. But even the suggestion that there be a negotiated solution was unacceptable for Algeria’s radicalized foreign policy.

Looking at Algerian history, this recent behavior should not come as a surprise. Algeria achieved independence in 1962. Within a year, Cuba, under Fidel Castro, deployed Cuban troops in response to a request for assistance from Algeria’s president, Mohamed Ahmad Ben Bella. In the words of a declassified CIA report from June 1965, Cuba dispatched its “most fiery advocate of national revolutionary movements,” namely Che Guevara, to Algeria and half a dozen African states. The elites of both states shared a common ideological worldview by the height of the Cold War.1 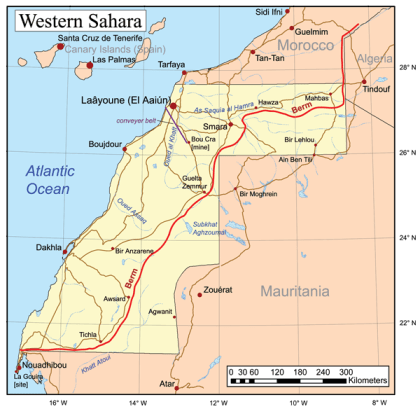 As tensions grew with Morocco, the Soviet Union also backed Algeria. In the years that followed, Algeria placed itself squarely in the pro-Soviet camp. In the 1970s, the Soviets used three Algerian ports (Oran, Algiers and Annaba) to help sustain their Mediterranean naval operations. Meanwhile, Morocco hosted American military bases, including two facilities for the bombers of the U.S. Strategic Air Command (SAC) and another airbase at Nouasseur for SAC fighter units.

A U.S. Naval Air Station operated at Port Lyautey. Along the Atlas Mountains, a U.S. Air Force Radar Warning System was set up. Naval communications installations were located at two other facilities. Thus, while Algeria was integrating itself into the military networks of the Soviet bloc, Morocco was an American ally tied to the U.S. strategic systems in North Africa.2 Now Algeria is engaging in a new military buildup as it purchases both Russian state-of-the-art aircraft and Chinese naval platforms, including frigates and corvettes, presently under construction. It should be recalled that China seeks to become a more dominant power in Africa in the years ahead.3

There was enormous irony in what was happening with Algeria’s struggle against Morocco. The Algerian revolution, which in 1962 grew from its ties with revolutionary Cuba, was now hosting the Iranians and effectively helping the forces of jihad within the territories of its neighbors. Its rejection of U.N. Security Council Resolution 2602 helped sustain the conflict over what used to be called the Western Sahara.

What did Algeria hope to gain from its economic squeeze on Europe by weaponizing its export of gas? In recent years, Algeria has been suffering one diplomatic defeat after another, and Morocco is winning in the U.N. Security Council. In 2017, Moroccan diplomacy succeeded in returning to the African Union after 32 years, and the African Union is supportive of Morocco’s claims in the Western Sahara. Moreover, in 2020, the United States recognized Moroccan sovereignty over the Western Sahara as part of a package deal by which Rabat backed the normalization agreements between the Arab states and Israel.

Undoubtedly, the Algerians would like to reverse these trends. One cannot rule out that Algeria seeks to muscle the European Union into an anti-Moroccan position with its gas policy. This harks back to the oil embargo of 1973, which sought to use oil as a political weapon. In addition, the Algerian leadership suffers from a legitimacy problem with its populace. Fanning the flames of limited confrontation over the Western Sahara might have been calculated to help bolster the Algerian regime internally.

I would like to thank Brig. Gen. (ret.) Dr. Shimon Shapira and Col. Dr. Jacques Neriah for their contributions and insights to this article.