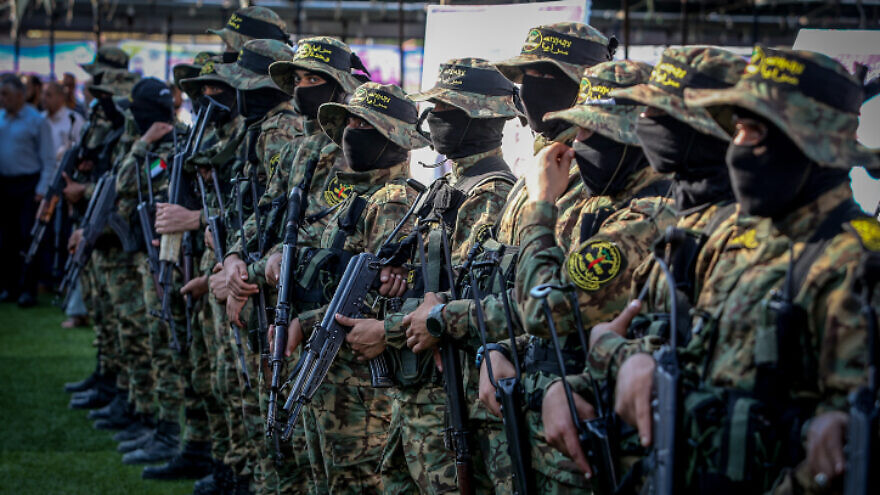 Palestinian Islamic Jihad fighters at a ceremony in honor of PIJ commander Khaled Mansour, who was killed on the first day of Israel's "Operation Breaking Dawn," in Rafah, in the southern Gaza Strip, on Aug. 8, 2022. Photo by Abed Rahim Khatib/Flash90.
Spread the word.
Help JNS grow!
Share now:

“The Zionist occupation continues its crimes against the Palestinian people, and is making a new, foolish mistake in its aggression in the city of Nablus,” Palestinian Islamic Jihad said in a statement.

A ceasefire was reached between Israel and the Gaza-based terror group just before midnight on Sunday, bringing to a close three days of fighting that saw some 1,000 rockets launched at Israel.

Israel’s “aggression” in Nablus “demands a popular and military uprising from every Palestinian, and starting today there is no room for excuses,” said a spokesman for PIJ in Judea in Samaria.

“The occupation does not distinguish between one faction and another and has made the entire Palestinian people its target. This demands that we unite and respond to these crimes,” the spokesman continued.

The raid that resulted in Nabulsi’s killing constituted “a serious escalation” that “demands we make a true, strong stand to stop the aggression,” said the spokesman.

Hamas, which rules the Gaza Strip, made similar threats. The Hamas spokesman in the Gaza Strip said that the “conflict with the Zionist enemy” was ongoing and escalating day by day.

Hamas also criticized the Palestinian Authority in connection with the raid, saying its forces had failed to take action to prevent his death.

“Nabulsi was killed near a Palestinian police station in Nablus, without them taking any action against the aggression of the occupation. All the P.A. security forces that coordinate with Israel are partners in spilling Palestinian blood,” the group said.