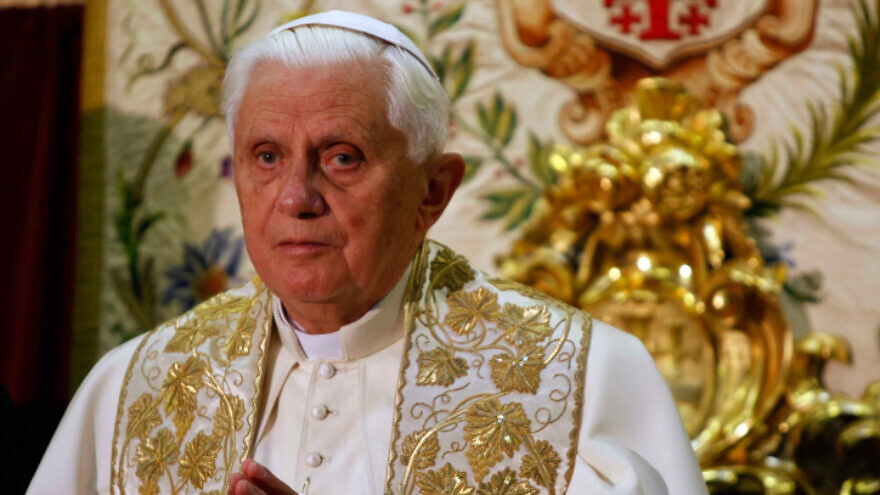 (January 9, 2023 / JNS) With the death of Pope emeritus Benedict XVI in Vatican City on Dec. 31, the Rabbi Sacks Legacy highlighted a notable 2010 meeting in Britain between the pontiff and Rabbi Lord Jonathan Sacks, who then served as chief rabbi of the United Kingdom.

Audio, video and a transcript of Sacks’s speech at the meeting have been made available. Sacks began his speech, “Your Holiness, we welcome you, leader of a great faith, to this gathering of many faiths, in a land where once battles were fought in the name of faith, and where now we share friendship across faith. That is a climate change worth celebrating. And we recognise the immense role the Vatican has played and continues to play in bringing it about.”

In the speech, Sacks offers his characteristic counterintuitive thinking to explain the rise of secularism across Europe: “The secularization of Europe that began in the 17th century did not happen because people lost faith in God. Newton and Descartes, the heroes of the enlightenment, believed in God very much indeed. What led to secularization was that people lost faith in the ability of people of faith to live peaceably together. And we must never go down that road again.”

Sacks recognized and celebrated Benedict’s words and their relevance to bring together people of minority faiths and diverse, creative perspectives. He commented, “You, your Holiness have spoken of the Catholic Church as ‘a creative minority,’ and perhaps that’s what we should all aspire to be: creative minorities inspiring one another and bringing our different gifts to the common good. Britain has been so enriched by its minorities, by every single group represented here today and the intricate harmonies of our several voices.”

Sacks then emphasized many commonalities in values between the Catholic and Jewish communities including emphases on community, respect, marriage, parenthood and “the poetry of everyday life when it is etched in homes and schools with the charisma of holiness and grace.”

He concluded his speech by saying, “Your Holiness, you have honored us with your presence and we honor you. May you continue to lead with wisdom and generosity of spirit, and may all our efforts combine to become a blessing to humanity and to God.”

Sacks died on November 7, 2020, and since then his former office has transitioned into the Rabbi Sacks Legacy, striving to preserve and promote his voluminous collection of books, articles and public speeches. After his death, Sacks was described by his admirers as “a man who exemplified what it meant to be a Jewish leader.”

Among Sacks’s most celebrated titles was 2000’s “A Letter in the Scroll: Understanding Our Jewish Identity and Exploring the Legacy of the World’s Oldest Religion,” widely regarded as one of the faith’s most effective, celebrated explications. Catholic historian Paul Johnson, author of 1987’s “A History of the Jews,” said of “A Letter in the Scroll,” “This short and scholarly book is an excellent survey of the moral strengths of Judaism and the ways in which its precepts can improve human conduct and add to our wisdom.”