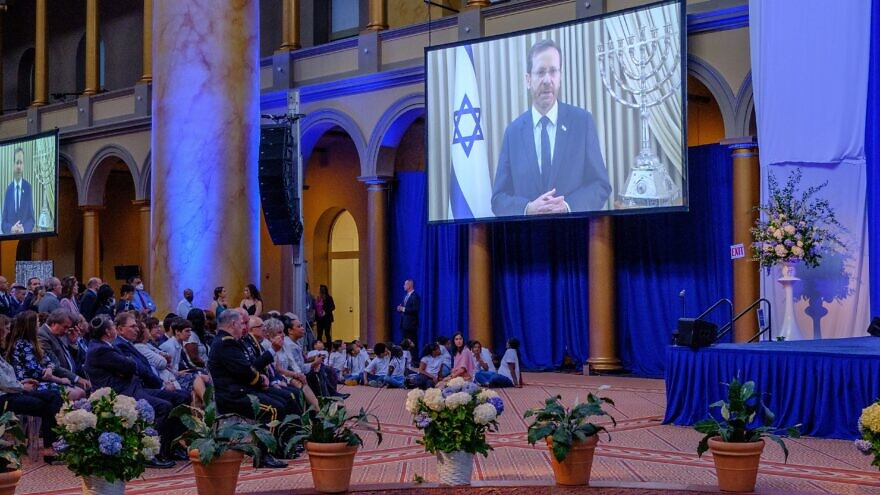 Israeli President Isaac Herzog displayed on a screen speaking to guests at Israel’s 74th Independence Day held in the atrium of the National Building Museum in Washington, D.C., on May 12, 2022. Photo by Dmitriy Shapiro.
Republish this article
1123 WORDS
Spread the word.
Help JNS grow!
Share now:

(May 18, 2022 / JNS) Israel’s diversity was put on display on May 12 as more than 1,200 distinguished guests filled a grand atrium of the National Building Museum in Washington, D.C., for the Embassy of Israel’s celebration of Israel’s 74th Independence Day.

The attendees included leaders from major Jewish organizations; Congress members; military officers from all over the world, including Chairman of the Joint Chiefs of Staff Gen. Mark Milley; senior members of the Biden administration; ambassadors; and philanthropists.

Gadeer Kamal-Mreeh, an Israeli Druze former member of Knesset who now serves as the senior envoy of the Jewish Agency for Israel to the Jewish Federation of Greater Washington, served as emcee for the evening’s program and began the ceremonies speaking in Hebrew, English and Arabic.

“I am not the typical Israeli you might expect to see on the tourist posters, but perhaps I should be. Because I am an Arabic-speaking Israeli Druze, a Hebrew-speaking national news anchor and an ex-politician who hails from a small village in the north of Israel,” she said. “This is the real Israel. And I am proud to represent the multiplicity of Israeli society, in the name of diversity, in the name of inclusion and in the name of equality.”

Rabbi Michael Beals, senior rabbi at Congregation Beth Shalom of Wilmington, Del., recited the prayer for the State of Israel in Hebrew from the stage at the beginning of the program. 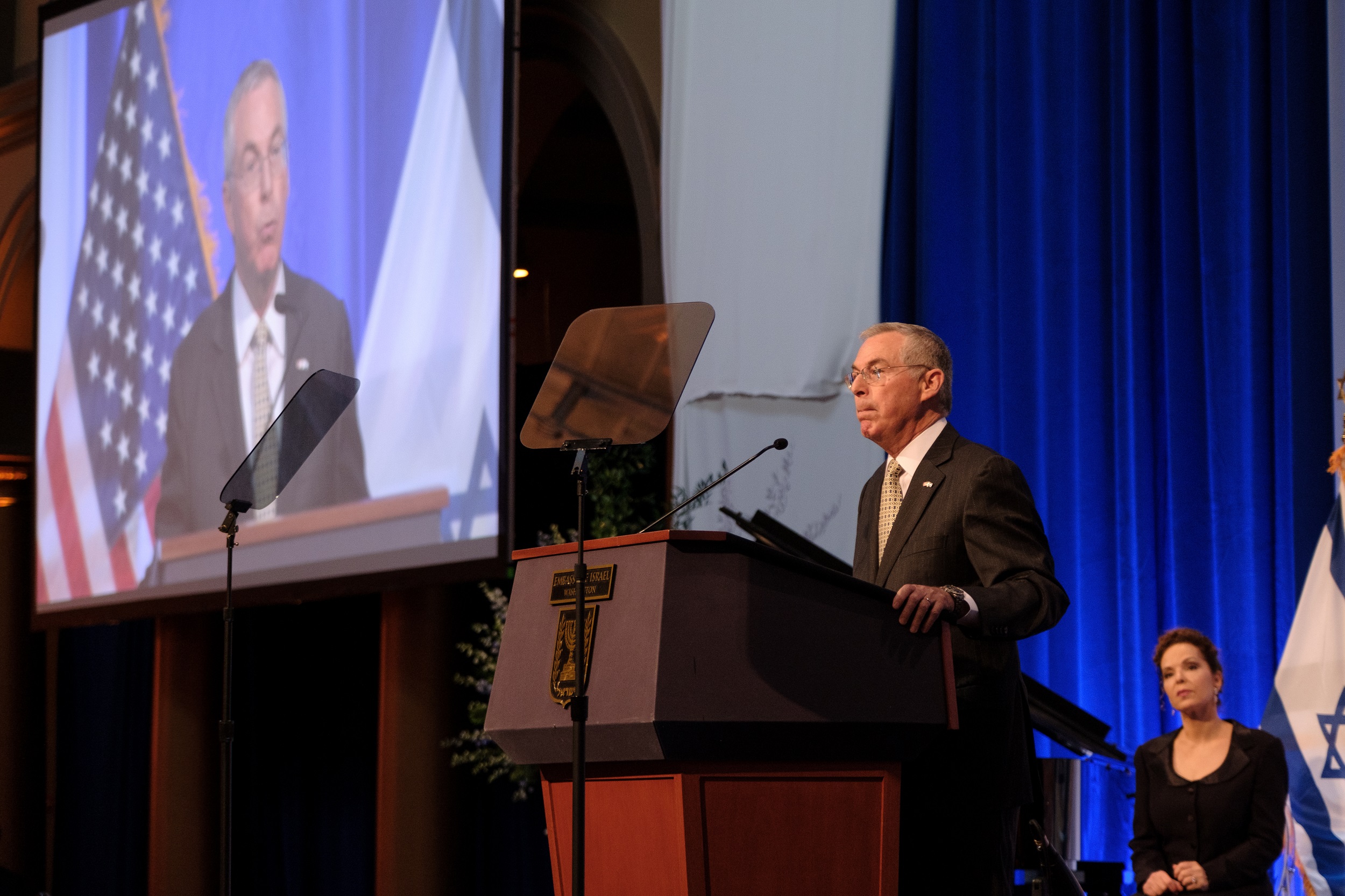 Israeli Ambassador to the United States Michael Herzog, the host of a celebration for Israel’s 74th Independence Day held in the atrium of the National Building Museum in Washington, D.C., on May 12, 2022. Photo by Dmitriy Shapiro.

The host of the evening, Israeli Ambassador to the United States Michael Herzog, and his wife, Shirin Herzog, were joined on stage by the night’s keynote speaker, U.S. Secretary of Homeland Security Alejandro Mayorkas, who also joined on stage with his wife, Tanya Mayorkas.

In his speech, Herzog recalled his family’s history in the land that is now called Israel and the belief his grandfather—the first Ashkenazi chief rabbi of the modern-day Jewish state—had in the survival of the Jewish people in the land.

“Indeed, the re-establishment of Jewish sovereignty on the ashes of the Holocaust and after 2,000 years of exile is a modern-day miracle,” he said. “Yet it has come with a heavy price. The blood, tears and sweat of our soldiers and citizens is a painful sacrifice that we will always remember. However, I am confident that these sacrifices were not made in vain.”

He praised the relationship that has developed between Israel’s new Arab allies after the signing of the Abraham Accords in 2020 and welcomed the Arab ambassadors, representatives and guests attending the event. But he continued by listing the challenges Israel still faces—namely, the malign behavior of Iran and the campaign to demonize Israel around the world. 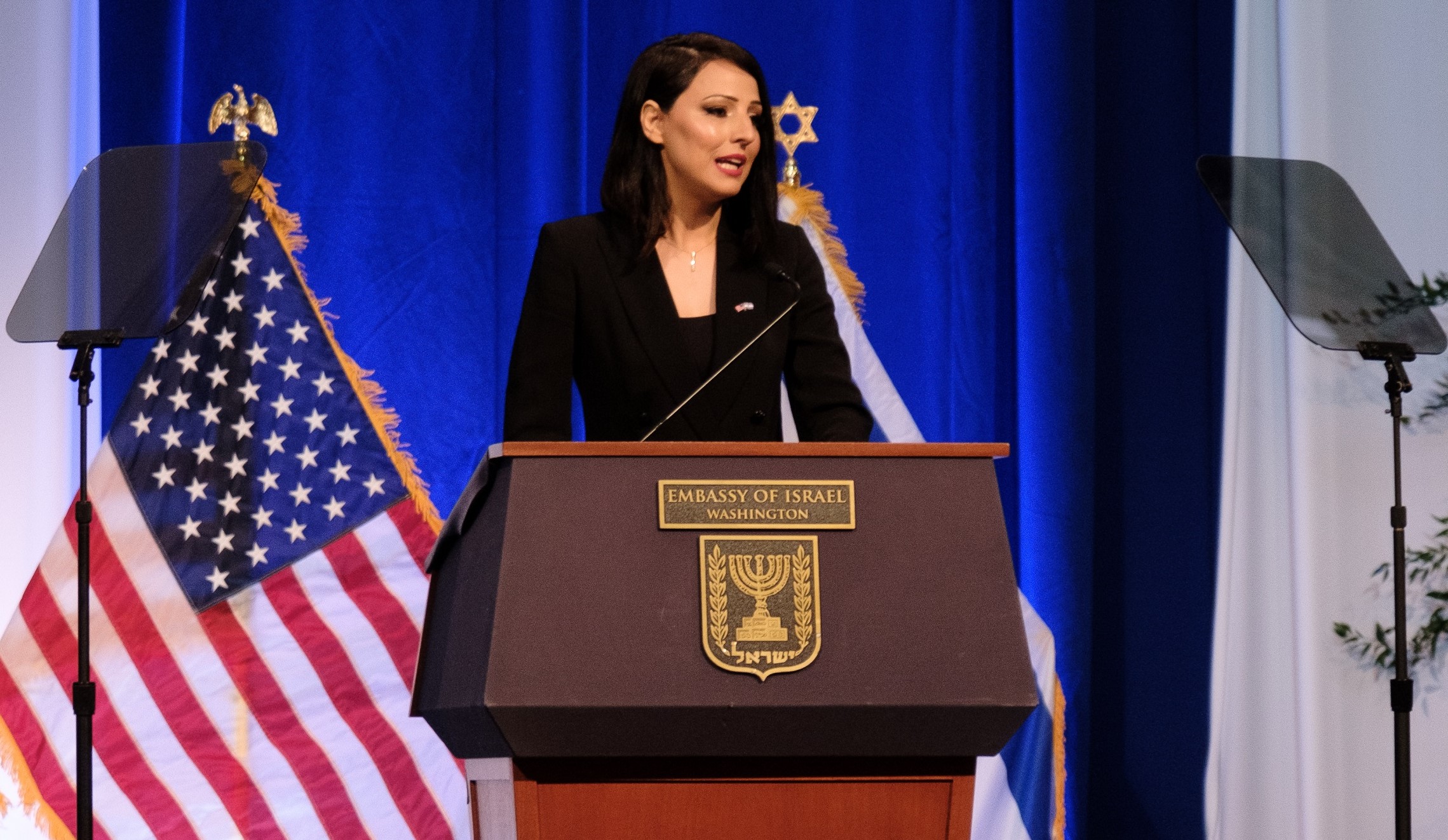 Gadeer Kamal-Mreeh, an Israeli Druze former member of Knesset who now serves as the senior envoy of the Jewish Agency for Israel to the Jewish Federation of Greater Washington, speaks at Israel’s 74th Independence Day held in the atrium of the National Building Museum in Washington, D.C., on May 12, 2022. Photo by Dmitriy Shapiro.

Despite these threats, he said he was optimistic that Israel could overcome its challenges.

He cited the Israeli spirit, strong military and robust economy, guided by the Jewish values like tikkun olam that not only led to Israel creating new groundbreaking technologies but to sharing its knowledge with nations in need of those technologies.

“Consider how Israel has pioneered the use of drip-irrigation technology, leading to a water revolution around the world, including here in the United States. Or look at the work we are doing in Africa bringing water, electricity and food security to millions,” said Herzog. “We are often the first to arrive at the scenes of crisis and devastation, and lend a hand. Just in the last few weeks and months, Israel was the only country to build and operate a field hospital inside Ukraine treating over 6,000 wounded from this horrible war.”

Before and after the speeches, the attendees were treated to performances by Israeli singer-songwriter Keren Peles, with the American and Israeli anthems sung by a children’s choir from a D.C.-area public charter school at which mostly non-Jewish students with no connection to Israel are taught with a Hebrew-immersion curriculum. Israeli singer-songwriter Keren Peles performs at a celebration for Israel’s 74th Independence Day held in the atrium of the National Building Museum in Washington, D.C., on May 12, 2022. Photo by Dmitriy Shapiro.

‘Diversity is a source of strength’

The ambassador also pointed to the diversity of Israel—the theme of the evening’s event—comparing it to the diversity in the United States and listing his family’s roots in Poland, Ireland, Tunisia, Egypt and Israel, coupled with the fact that Israel has recently absorbed more than 23,000 people from Ukraine.

“For the United States and Israel, diversity is a source of strength,” he said. “We are both nations of immigrants.”

The Cuban-born Mayorkas also recalled his Jewish roots, with his mother’s family having stayed in Romania well into the years of World War II and the Holocaust, losing many family members before escaping to Cuba because Israel and the United States were no longer accepting refugees.

“My grandfather, Michel, lost almost his entire family in the Holocaust. One sister and two nephews were able to settle in Tel Aviv. I first visited them when I traveled and worked on a kibbutz in the summer of 1977,” said Mayorkas. “I am now in a position to help advance the security of the United States and work closely with Ambassador Herzog and others to advance our friendship and partnership with the State of Israel. It is an example of the American story and the story of the Jewish Diaspora.” 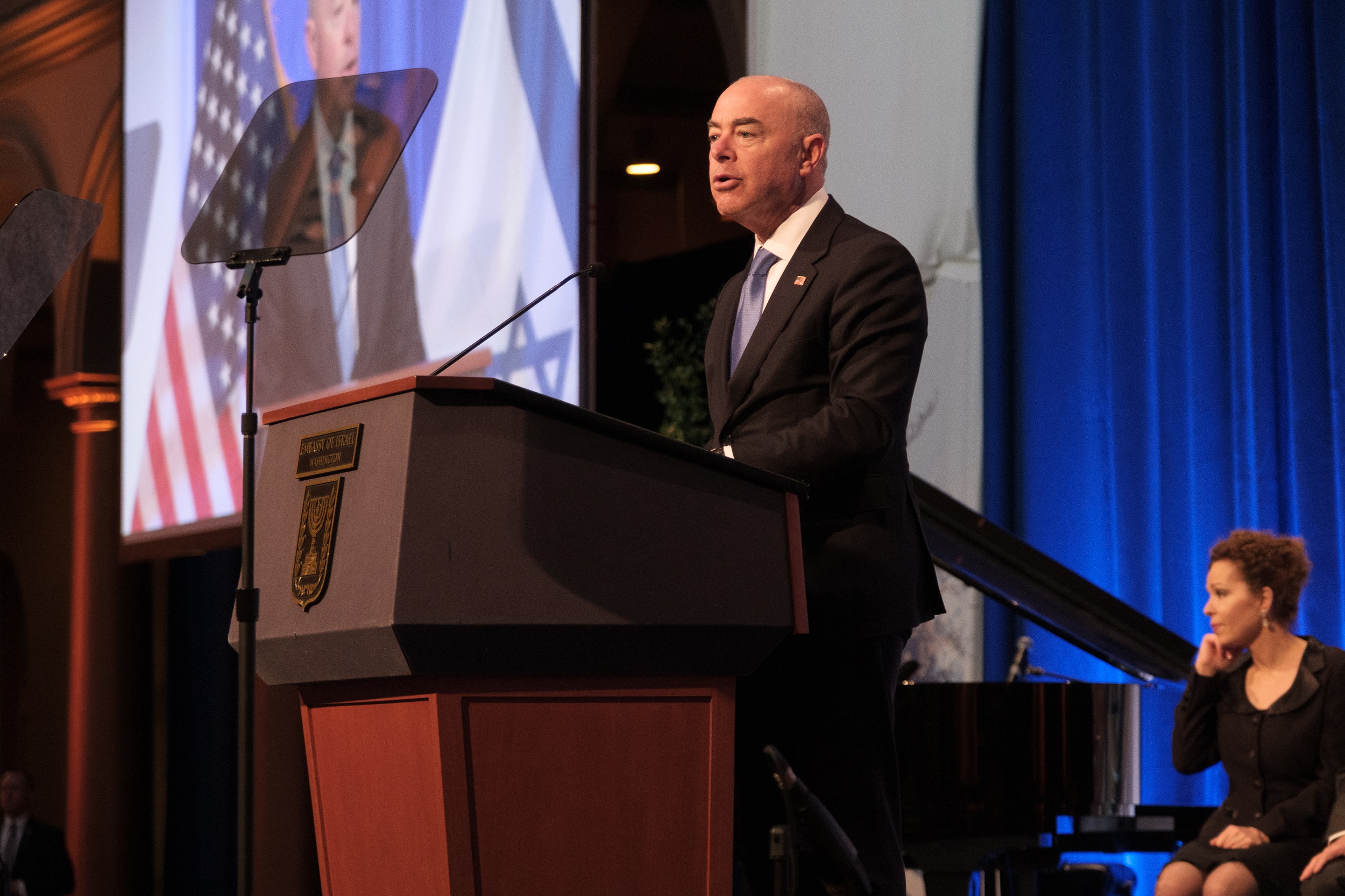 U.S. Secretary of Homeland Security Alejandro Mayorkas at a celebration for Israel’s 74th Independence Day held in the atrium of the National Building Museum in Washington, D.C., on May 12, 2022. Photo by Dmitriy Shapiro.

The two nations, he said, work together to share information to fight terrorism, strengthen cybersecurity, foster trade and promote travel that benefit both constituencies.

Isaac Herzog quoted the speech of President John F. Kennedy in 1960, who said that Israel will endure and flourish because it is “the child of hope and the home of the brave.”

“Indeed, both the State of Israel and the United States of America are the land of the free and the home of the brave,” he said. “We both seek peace, whilst knowing that sometimes the sword is needed to defend freedom. We both believe that diversity and democratic debate are a source not of weakness, but of strength.”

He thanked Biden for sending a “clear” and “consistent” message of warmth and “friendship, candor and dialogue.” He also called for support for Israel to remain nonpartisan.

“If we disagree, let us do so respectfully. When we agree, let us act in harmony,” said the Israeli president.

Biden said in a video message that the close friendship between the two countries began with the United States being the first country to recognize Israel 11 minutes after its founding and that 74 years later, “we’ve achieved so much together.”

From collaborating on cutting-edge science and technology research to trailblazing new regional ties to ensure Israel’s security, said Biden, “the partnership between Israel and the United States has been indispensable—for the United States and, I believe, for Israel as well.”