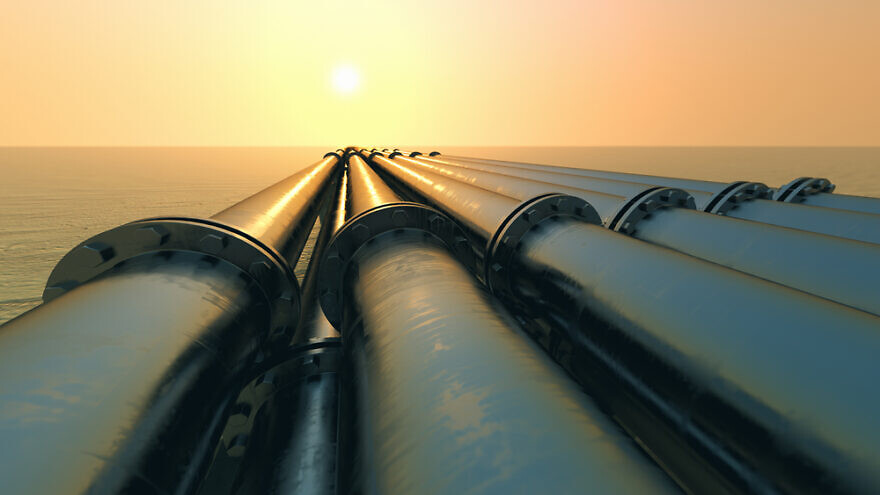 (April 15, 2022 / JNS) An Israeli plan to build and develop a pipeline in the Eastern Mediterranean that would bring natural gas from the offshore fields of Israel and Cyprus across Greece to Italy and Bulgaria appears to be faltering. With a number of logistical and funding issues, as well as the loss of support from the United States, the EastMed Pipeline, as it has come to be known, seems nothing more than a pipe dream. Still, it’s not a total loss, and some positive aspects have materialized thanks to the project.

Earlier this month, officials from Israel, Greece and Cyprus met in Athens to deepen their energy cooperation on natural-gas pipeline projects, especially in light of the ongoing war in Ukraine. The European Union has expressed interest in decreasing its reliance on Russian gas due to the war.

Foreign Minister of Cyprus Ioannis Kasoulides said “we are proceeding with projects such as the EuroAsia Interconnector and the EastMed pipeline … and we are confident that when materialized, they will have another practical and geostrategic value for the Eastern Mediterranean and the European Union,” according to a report by Reuters.

Cyprus, Greece and Israel also agreed to build the world’s longest and deepest underwater cable to link their electricity grids in the EuroAsia Interconnector project, which is expected to be finished in 2024.

But Simon Henderson, director of the Bernstein Program on Gulf and Energy Policy at the Washington Institute for Near East Policy (WINEP), told JNS that a number of problems exist concerning the pipeline, some of which include the fact that it would be “too long, too deep, there is “not enough gas,” and there are “sovereignty issues” involved with some countries making competing claims to the same areas through which the pipeline would run.

Turkey is not part of the EastMed project, but since it declared an exclusive economic zone (EEZ) that overlaps the pipeline route and has an existing EEZ dispute with Greece, there are “too many headaches,” according to Henderson.

He also said he wasn’t sure that the United States had ever actually supported the pipeline, though “it did want to encourage cooperation between Israel, Greece and Cyprus.”

The EastMed Pipeline is a proposed 1,300-mile pipeline—1,000 miles of which would be undersea—from the Levantine Basin to Europe, making landfall in Cyprus, Greece and Italy. While the Trump administration supported the project, the Biden administration has not, freezing the effort after the U.S. State Department sent a non-paper to Greece in January in which it expressed reservations about the pipeline’s environmental impact and economic feasibility.

According to the Greek media, the non-paper described the project as a “primary source of tension,” and something that was “destabilizing” the region by putting Turkey and regional countries at loggerheads.

Although the United States was not providing the funding—estimated at close to $7 billion—its political support was considered essential to go forward.

Elai Rettig, assistant professor at the department of political studies at Bar-Ilan University in Ramat Gan who specializes in energy geopolitics, told JNS the pipeline “lacked economic viability at the time that the U.S. made the announcement.”

He explained that EastMed was designed to be the longest and deepest underwater pipeline in the world for a relatively small amount of gas.

Rettig said in some areas, the water pressure would force the pipeline to be rather small in diameter, and in other areas, like near the island of Crete, the bottom of the sea is volcanic, so the ground moves. “It makes for a very challenging engineering project,” he said. “It would have cost a lot and would require European customers to pay a high price to cover the costs of the pipeline.”

Now, he said, “prices of gas in Europe are soaring, so you can justify the pipeline. But when you build a pipeline, you need to assess the price five years from now when the pipeline would be built and not what the prices are right now. So investors are still on the fence. Before they build a pipeline, they need to secure a binding 10- to 15-year contract with a customer in Europe at a fixed price,” but no one is willing to commit.

Rettig noted that when America said it would “withdraw its support” from the pipeline, “this didn’t mean much because the U.S. wasn’t offering to pay for the pipeline at any point. So it mostly had a psychological aspect of putting the final nail in the coffin and ‘releasing’ Israel to start negotiating other options, like liquefied natural gas (LNG) or a pipeline to Turkey, without angering Greece and Cyprus.”

‘Get the ball rolling again’

Moving forward, Rettig said that the pipeline is likely to fail. The U.S. announcement, he noted, was a way for Amos Hochstein, the State Department’s senior adviser for global energy security, to “shake things up.”

According to Rettig, this could be a “prize” to Turkey, “as part of the attempt to warm relations with the U.S., and maybe appease Turkey and get them to allow Cyprus to develop their gas fields and stop blocking it with warships.”

Rettig clarified that the United States “isn’t paying for a pipeline or for an electricity grid. They’re just facilitating discussions.”

He added that “perhaps there was a feeling that things are just ‘stuck’ because the EastMed option is not moving, so they might as well ‘kill it’ in order to spur new types of conversations with Turkey or Lebanon and get the ball rolling again in a fresh way.”

Rettig said he wasn’t sure how economically viable the interconnector line is, “but it’s good to talk about it. It keeps the Israel-Cyprus relations warm and the dialogue ongoing.”

Henderson agreed, writing in a January analysis for WINEP that “although Israel, Greece and Cyprus are no doubt disappointed about the withdrawal of U.S. and E.U. support, the project has served the valuable purpose of bringing them together diplomatically.”