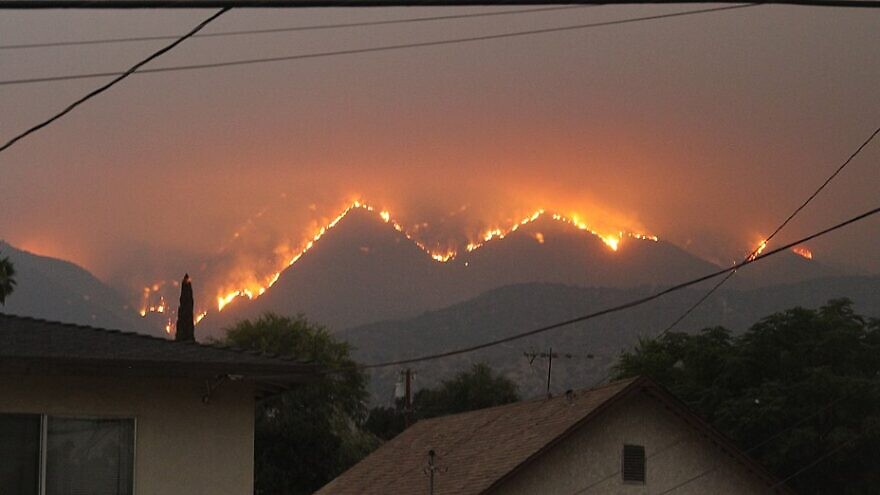 (October 25, 2020 / Israel21c) Ten Israeli firefighters flew to California on Aug. 30. Over the course of 15 days of exhausting, dangerous work, they became a battalion of brothers with their California colleagues.

“During the time we spent with these Israelis who came to help us, we became much more than coworkers. We bonded with them as part of our firefighting family,” said Chief Scott Lindgren of the Amador-El Dorado Unit of California’s Department of Forestry and Fire Protection (Cal Fire).

“They became part of our team and it was hard to see them go. We worked hard, we had some fun, we had discussions—heated discussions, too, about differences in how we do some of our work—and it was extremely beneficial for us.”

Lindgren was speaking at a recent online presentation of the America Israel Friendship League about the extraordinary cooperative firefighting experience.

The idea for the volunteer delegation began with Israeli Consul General in San Francisco Shlomi Kofman.

On Aug. 25, 10 days after 14,000 lightning strikes sparked fires across central and northern California, Kofman made inquiries about how Israel could contribute in “solidarity and friendship.”

“They need boots on the ground ASAP,” Kofman reported the next day to Itai Bardov, director of the U.S. Consulates Department in Israel’s Foreign Ministry.

“In 2010 and 2016, the Americans sent us help when we had raging fires in Israel, and we were happy to give back,” said Bardov, who accompanied the mission.

Bardov asked Israel Fire and Rescue Services Commissioner Dedy Simhi to find 10 volunteers and raced to complete all the paperwork.

Despite knowing they would return to spend the Jewish High Holidays in quarantine away from their wives and children, “I had more volunteers than the 10 I was approved to gather,” said delegation head Itzik Oz. “Everyone wanted to assist our friends overseas.”

A taxing and critical shift

According to Cal Fire, 11,000 firefighters remain on the front lines of 20 wildfires across the state, 13 of which are still major incidents.

“A lot of our employees have been on duty non-stop since July,” said Lindgren. “Early on, we knew we were in trouble and it would be a long fire season, but we didn’t know it would be the worst fire season in our history.”

His unit, headquartered at McClellan Air Tanker Base, has pumped 4 million gallons of fire retardant so far this season.

“Israel sent 10 of its finest firefighters and they didn’t come for a tour or a vacation but to jump in and fight fires. We don’t always get that from other [countries’] delegations,” said Lindgren. “The Israelis stepped off the plane ready to go. That was huge for us.”

After a short orientation that included translating liters to gallons and kilometers to miles, the Israelis were prepared to work with “the special heroes from Cal Fire,” said Oz.

“We went over the equipment they had brought and issued them fire shelters and good boots,” said Lindgren. “Their radios were not compatible to ours—they were in many ways superior to ours, with automatic locators—so we got them squared away with gear. The next morning at 4 a.m. we were off to the August Complex in northern California.”

As of Oct. 14, the August Complex fire in Mendocino County has burned more than a million acres and is not fully contained. Coming from a tiny country, the Israelis had never encountered a fire with this kind of magnitude.

Just getting to the blisteringly hot site involved “a really gnarly hike full of boulders and steep slopes,” said Lindgren. “They worked with one of our hand crews for 24 hours. It was a taxing and critical shift.”

Hand crews are the infantry of wildland firefighting. They use tools such as chainsaws and drip torches to construct fire lines—strips of land cleared of flammable materials and dug down to mineral soil to prevent the spread of flames.

“Their dedication and cooperation in the field was amazing,” said Israeli First Officer Ido Braun.

“We did a little training to be certified in their procedures with hand tools and chainsaws. Here in Israel, we work more with hose lines. But we quickly understood what the operation was about and now we have new ideas for our fire services from our brothers in Cal Fire.” 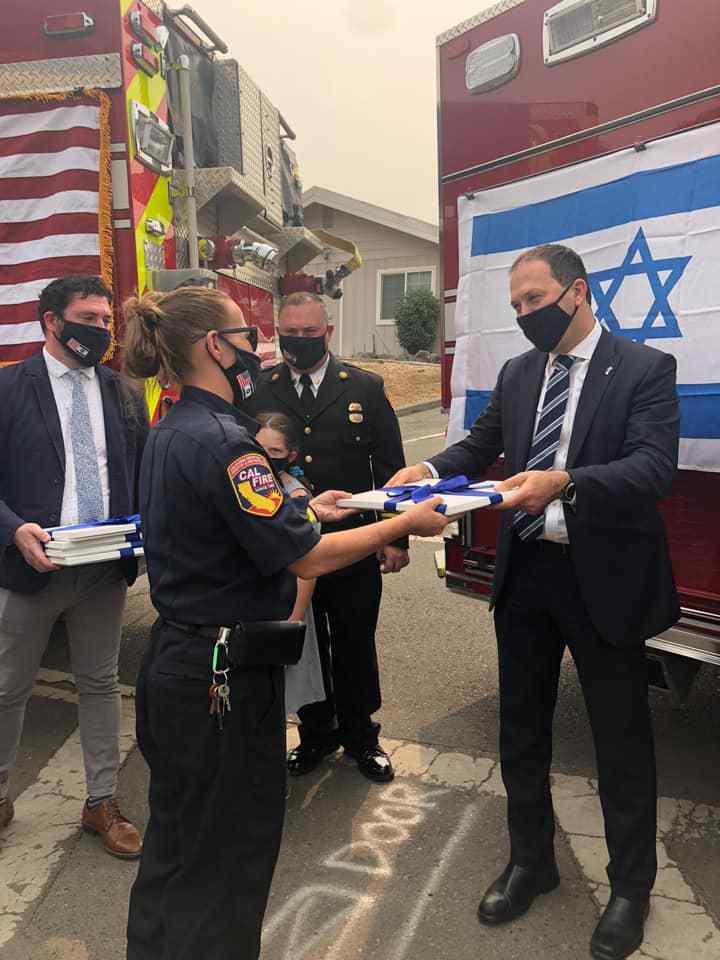 Cal Fire firefighters giving gifts to the Israelis who came to help them, September 2020. Photo courtesy of Israeli Consulate in San Francisco.

After that first assignment, Lindgren rotated the Israeli volunteers to different units and assignments.

Some of the officers worked with Cal Fire operations chiefs and branch directors; one did a shift with the logistics personnel; others went to the Cal Fire training academy, manned engines at local fire stations, or accompanied the fire investigation unit. The volunteers also served another shift with the hand crew and with a strike crew. Finally, they returned to Amador-El Dorado and ended by cooking an Israeli dinner for their hosts.

“It was breathtaking and inspiring for us and for civilians affected by the fire,” said Amador-El Dorado Unit Assistant Chief of Administration Nathan Barcklay.

“It was more than them coming to help; it was the inspiration of seeing the cooperation between our two countries and just as human beings.” 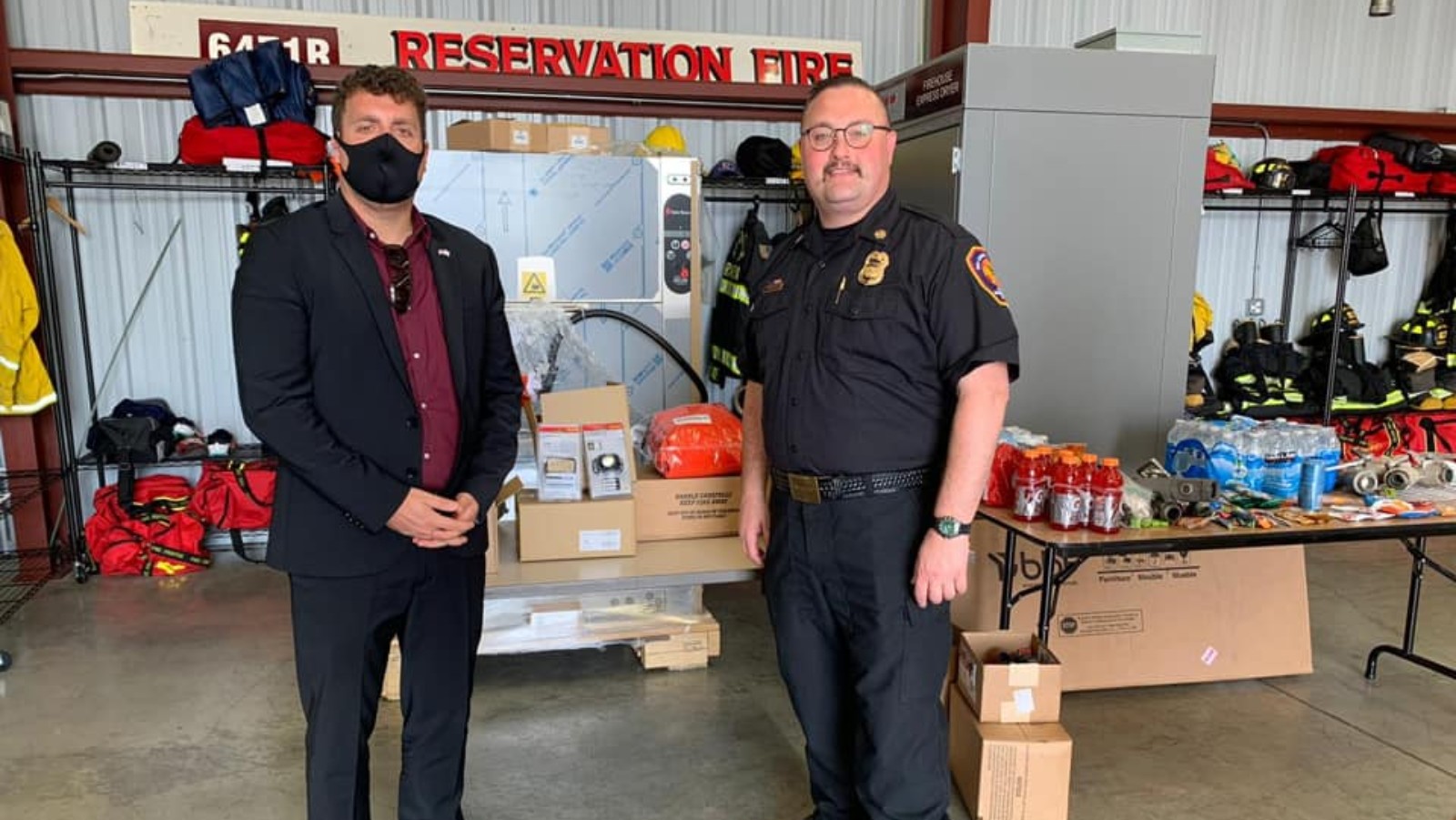 Braun said their California colleagues were surprised that the Israelis came to help fight a fire across the ocean, especially during a pandemic and a time when Israel’s fire season is also beginning.

“There’s a bond between firefighters—it doesn’t matter what country but especially between the U.S. and Israel that have such a strong connection,” he said.

“I would like our cooperation with our brothers in Cal Fire to continue in the future. Unfortunately, even though we hope not to see more fire, it will happen because the climate is changing. We need to be ready and prepared to help each other.”