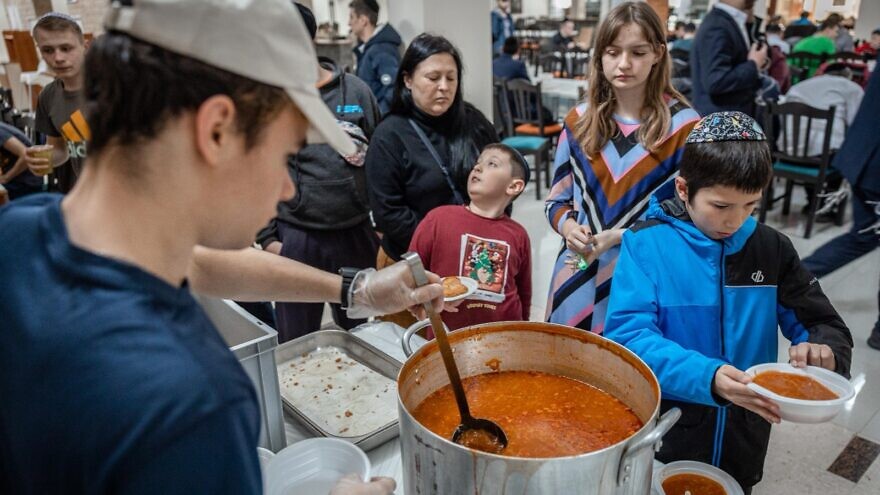 The Conference of European Rabbis is working to ensure that thousands of Ukrainian Jewish refugees get access to a Passover seder, in addition to kosher food, April 2022. Credit: CER.
Spread the word.
Help JNS grow!
Share now:

(April 11, 2022 / JNS) The Conference of European Rabbis (CER) is working extensively to ensure that thousands of Ukrainian Jewish refugees can celebrate the Passover holiday. It is also funding and supporting communities throughout Europe to welcome and integrate these displaced families and individuals into their communities, offering them a permanent home.

In Poland, the CER is supporting more than 15 Passover seders across the country for some 1,500 refugees who fled there following Russia’s invasion of Ukraine. Local rabbis, including many members of the CER, will lead them, oftentimes in Russian. The operation is being coordinated by Chief Rabbi Michael Schudrich, the official CER spokesperson in all matters pertaining to the Russia-Ukraine crisis and a member of the standing committee.

Regarding the CER Passover Aid initiatives, Chief Rabbi Michael Schudrich said “as we recite in the opening passage of the Haggadah, ‘Whoever wants, come and celebrate Pesach; whoever needs, come and eat.’ The Conference of European Rabbis is doing all it can to ensure that this is a reality for the thousands of stranded and displaced Jewish refugees who have left their homes in the face of war. Now they will be able, along with the rest of the Jewish people, to sit and celebrate Pesach, free from danger and hunger.”

Romania will also hold holiday dinners for about 1,200 from the community of Odessa, Ukraine, who are now housed in Neptun along the Black Sea in southeast Romania. Holiday celebrations are also planned in Moldova, a transit country for fleeing Ukrainians.

In Hungary, the CER is supporting the Orthodox Jewish community in Budapest to host a communal seder. Throughout the crisis, the CER has also sponsored the provision of kosher food in Budapest to those refugees who need it.

In addition to these relief efforts across refugee centers, as well as the Eastern and Central Europe countries that have seen an influx of people fleeing the war, the CER has also invested in longer-term projects to help Ukrainian refugees, supporting several communities across Europe, such as Vienna, Austria, and Munich, Germany, to take in and absorb those wanting to make a permanent home in those cities.

Gady Gronich, CEO and chief of staff to the president of the CER Foundation, who has been overseeing the aid efforts, said that “we are doing all we can to enable thousands of refugees across the continent to find safety and support, both physically and spiritually, and will also have the opportunity for long-term stability.”