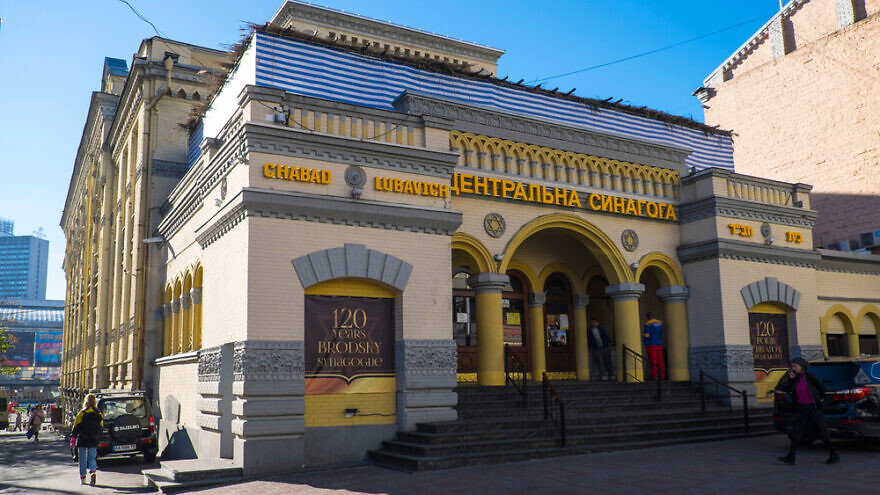 (February 25, 2022 / Israel Hayom) Ukraine’s Jewish communities are preparing for an unusually tense Shabbat, without knowing if they will be under Russian or Ukrainian rule when the Sabbath is over, or what the war will bring.

Synagogues in the country were under heavy security for fear of looting and anti-Semitic attacks.

“I don’t have the faintest idea what will happen here on Shabbat. The last time sirens sounded in the city was probably during World War II,” said Rabbi Ariel Markovitch, head of the Israeli congregation in Kyiv and the son of Chabad House Rabbi Jonathan Markovitch.

Rabbi Ariel, his family, and other people were at Kyiv’s Chabad House, which was stocked with food and extra mattresses.

The head of security at the Federation of Jewish Communities in Ukraine, an umbrella organization that represents 160 Jewish communities throughout the country, urged Ukrainian Jews to stay at home in accordance with local government instructions and Ukrainian President Volodymyr Zelensky’s request that all Ukrainians do the same.

The federation recommended that “everyone pray at home this Shabbat.”

Rabbi Baruch Efrati explained that because Ukraine is in a state of emergency and lives are at stake, the principle of pikuach nefesh is in effect, making it permissible to leave cellular phones on during Shabbat, and if there is no alternative, radios.

“Jews living in war zones can reach an agreement with non-Jewish friends or neighbors that if anything unusual happens that demands movement or organization, they will call. Therefore, cell phones can be kept on for Shabbat. If there is no non-Jew, or concern that they will not inform Jews, then a radio can be kept on if tuned to a station that mainly provides news,” Efrai said.

In an emergency meeting held Thursday, community rabbis in Ukraine decided to stay in their cities to help the local residents at this difficult time. The meeting also decided that families of emissaries would also remain, because it would be safer for them to stay in their homes than be on the roads.

Federation head Rabbi Meir Stembler said, “We’re staying, and praying for it to be all right. Our job is to be with the communities, to help and calm them as much as possible during this war. We are already feeling shortages. People are hysterical because, despite everything, no one believed that there would be an all-out offensive against Ukraine. We are organizing medicine, water, and food – including flour and dry goods – to last for a few weeks and distributing them to Holocaust survivors, the elderly, the disabled, and the poor so they can stay at home as much as possible.”