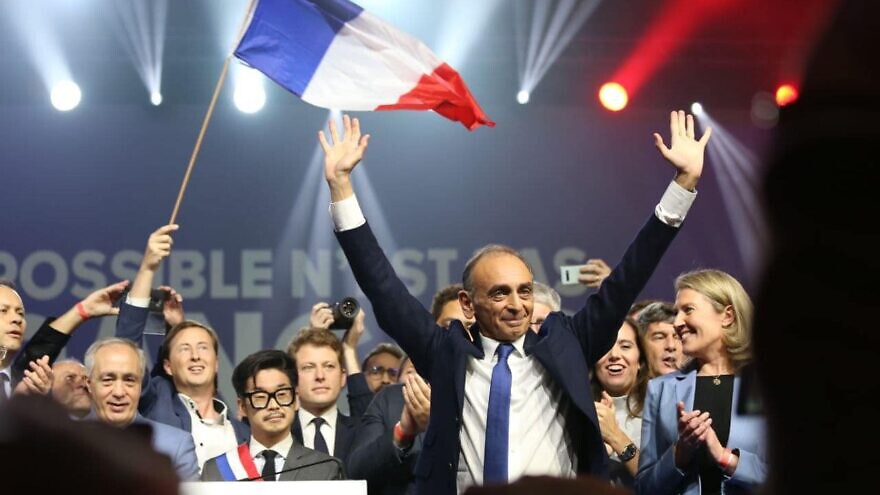 (December 17, 2021 / JNS) Many nicknames and adjectives have been thrown around to describe the new talk of the French town, Éric Zemmour, the French journalist turned presidential candidate: brilliant, knowledgeable, extremist, racist, far-right, provocateur, and, perhaps the most catchy: the “French Trump.”

But there’s one adjective no one can deny: Jewish. Born to an Algerian Berber family that migrated to France in the 1950s, Zemmour was educated in Jewish schools and attended synagogue in Parisian suburbs. If his romantic interests—and gossip—are any indication, he’s loyal to Jewish continuity. He has three children with his Jewish wife of Tunisian descent, Mylène Chichportich. And a French tabloid has reported that his Jewish mentee and advisor, Sarah Knafo, is pregnant with his “lovechild.” (Zemmour has filed suit to block the story.)

But what remains up for debate is how much, if at all, his Jewish identity plays a role in his positions, popularity and electability among Jews and non-Jews alike.

Zemmour is most well-known—or notorious—as a critic of Islam, having earned his “far-right” epithets for not differentiating Islam from radical Islam. He calls for an end to immigration and the full integration of Muslims in France. He buys into the “Great Replacement” theory that predicts native Europeans will eventually be replaced by Muslim migrants and their descendants unless they are stopped.

His views on Islam resonate with the majority of French Jews, particularly the 70 percent hailing from the former French protectorates of North Africa: Morocco, Tunisia and Algeria. French Jewry turned sharply to the right during the years of the Second Intifada in Israel from 2000 to 2005. Islamist attacks on individual Jews and businesses—like the murder of 23-year-old Ilan Halimi in 2006, the Hyper Cacher kosher supermarket shooting in Paris in 2015, the murders of 65-year-old Sarah Halimi (no relation) in 2017 and 85-year-old Mireille Knoll in 2018—created deep resentment and suspicion among Jews towards their Muslims counterparts.

Some suburbs of Paris and Marseilles with high populations of poor, immigrant families have deteriorated into no-go zones for Jews. Currently, about 500,000 Jews live in France. Tens of thousands of French Jews have left in recent years, many of them to Israel, ostensibly in response to growing anti-Semitism.

But it’s not the Jewish side of Zemmour that spurs his critical stance on the Muslim populace. It’s his proud French side. The general French populace, he argues, have been hurt by Islamic violence and a parallel Muslim society spiteful of the country in which they live.

His brand of patriotism is one that can be expected from Jews of Algerian descent. After receiving French citizenship by fiat in 1870, they overall embraced their French identity with fervor. The bloody Algerian War of 1954 to 1962 spurred them and other French loyalists to flee the Maghreb for the French mainland. 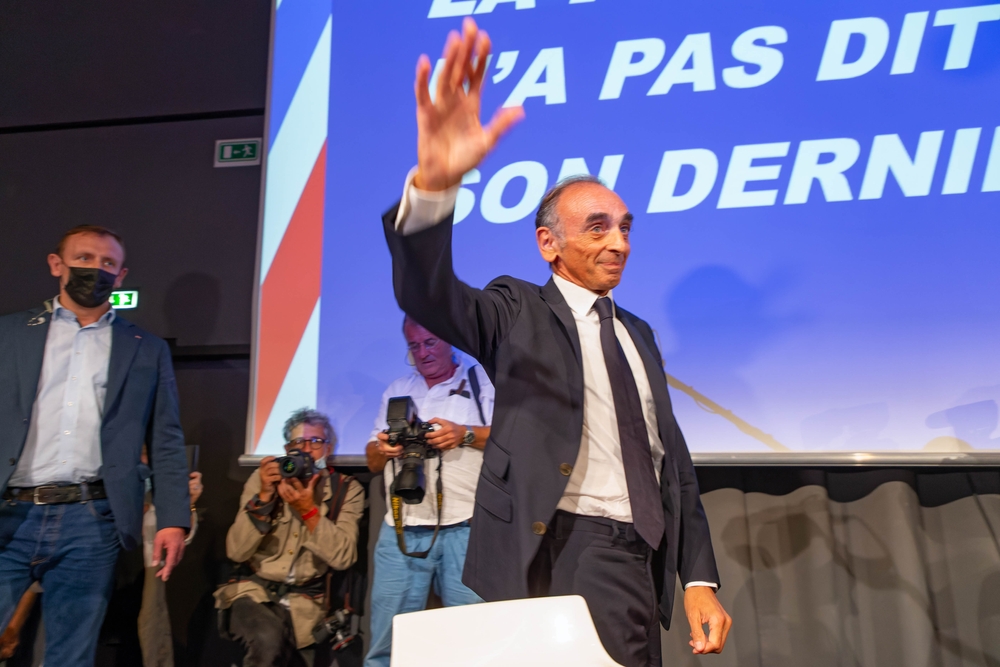 ‘A vestige of Napoleon-era Jews’

Shimon Samuels, director of the European branch of the Simon Wiesenthal Center, likens Zemmour to “Weimar Jews”—the assimilated Jewish-German patriots of the 1920s, among them decorated World War I veterans, who considered themselves “German citizens of Jewish heritage.” Zemmour is also a vestige of Napoleon-era Jews who celebrated their liberation under the French revolution—as individuals, less as members of a community.

Zemmour prompts the French people to embrace the best of their historical and cultural heritage. He has called for the reinstatement of a Napoleon-era law that says French newborns cannot be given foreign names (with “Muhammed” being a main target). He has riled the established Jewish community for seeming to put French pride over Jewish-ethnic loyalty, even prompting the chief rabbi of France, Haïm Korsia, to label him “an anti-Semite.”

Most controversially, in his bestselling books, Zemmour came to the mitigated defense of the French Vichy leader, Philippe Pétain, arguing that Pétain did his best, under the circumstances, to save French Jewry.

“Zemmour has made one crucial mistake in exonerating Pétain, the head of the Nazi collaborators of Vichy France, for deporting some 72,000 Jews to their deaths,” said Samuels. “Even worse and spurious, Zemmour claims that only foreign Jewish migrants were deported. Now, this may win him some votes among the extreme right, but it’s an anathema to the French.”

Samuels would not categorize Zemmour as a self-hating Jew but welcomes the chief rabbi’s criticism. Jews who tend to favor Zemmour, like local Parisian politician Philippe Karsenty, view his interpretation of Pétain as an attempt to be historically fair, however misplaced.

Karsenty made international headlines when he exposed French media for wrongly reporting that the Israeli army shot and killed 12-year-old Muhammad al-Dura during the outbreak of the second intifada. He has known Zemmour for more than 20 years. 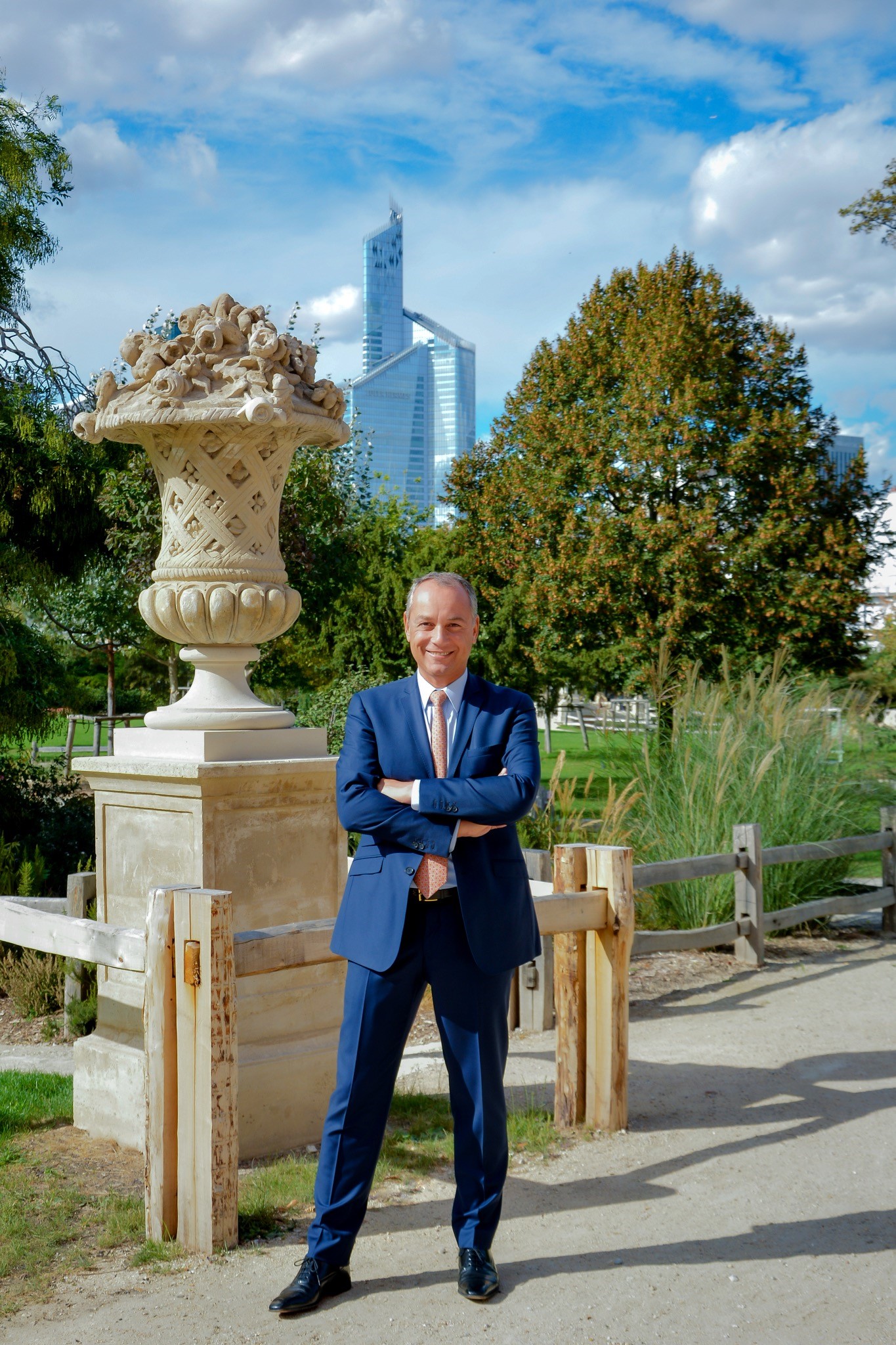 “According to what I know, he is a good person and a good Jew,” said Karsenty, adding that Zemmour presented himself on French television 10 years ago as a “Jewish French person.” “The Great Rabbi of France is a politician. He does politics and works for the establishment. To call him an ‘anti-Semite’ is absurd. The most important thing for the French Jewish establishment is not to rock the boat. And Zemmour’s rocking the boat. He’s talking about the elephant in the room that no one wants to talk about: Islam, immigration, replacement.”

Karsenty concedes that Zemmour made “inappropriate statements.” This includes Zemmour’s other controversial argument that people are loyal to the countries where they choose to bury their dead—one that Zemmour applied to the victims of the 2012 shooting at a Jewish school in Toulouse, who were buried in Israel, and to the terrorist, who was buried in Algeria.

“He called the grandfather of the kid and the rabbi, and apologized in a private conversation,” said Karsenty. “The father said the incident is over.”

‘You have to go beyond partisanship’

Michael Amsellem, a Parisian ex-pat of Moroccan descent who made aliyah to Israel several years ago, believes Zemmour’s positions on hot-button issues will draw the Sephardi Jewish vote. Ashkenazi Jews, on the other hand, generally fall in line with the Jewish establishment, represented by CRIF, the central council of Jews in France.

Amsellem is himself unsure if he’ll vote for Zemmour via absentee ballot in Israel. He’s not, however, deterred by the CRIF’s criticisms of Zemmour, likening its behavior to that of “court Jews.”

“When you’re a Jewish organization, you have to go beyond partisanship,” said Amsellem.

Although Zemmour is not classically pro-Israel, Amsellem predicts he will secure the absentee vote of the Zionist-minded French-Israeli.

“He doesn’t care about Israel officially, at least in public,” said Amsellem. “But about ‘Palestine’—he says Palestinians have lost so, there won’t be any Palestinian state. Just for this, Jews who lean with Israel would vote for him.”

Zemmour would also recognize Jerusalem as the capital of Israel.

“Which he said was obvious to him,” said Karsenty. “All this makes him the most pro-Israel French politician.”

What most appeals to his voters of all religious persuasions is that he, like the American president to which he is often compared, defies political correctness, but with his trademark eloquence and wit.

“The guy has a perfect diagnosis of the situation,” said Karsenty.

Karsenty sees definite resemblances of Zemmour to Trump—not only in their desire to make their respective countries “great again” but in treatment by mainstream media.

“Think about Donald Trump, but 10 times worse,” said Karsenty. “Media interviews with him are more like interrogations.”

Zemmour’s campaign rally on Dec. 5, where he introduced his “Reconquest” political party to some 12,000 supporters, was marred by a brawl that saw injury to his wrist. He is often stalked by France’s equivalent of far-left “Antifa” activists as a means, Karsenty believes, to make him toxic.

So does he have a chance to win?

While in October he shot up to second place in the polls behind President Emmanuel Macron, he has since fallen back, and he’s now edging the traditional right-wing candidate, Marie Le Pen, and the head of the center-right Republican party, Valérie Pécresse, at around 15 points. To take on Macron on April 24, he’d have to overtake the right/conservative flank in the first election round on April 10. Amsellem thinks he may have what it takes to do just that.

“The fact that he’s a Jew means he can say things that if they were said by simple French rightist, it wouldn’t be kosher,” said Amsellem. “But if he’s a Jew, he can’t be criticized the same way. … He succeeded in speaking to the pride of the popular classes and also to the elitist right because he’s very intelligent.”

“If he goes to the second round against Macron, you’d have huge demonstrations and people claiming the fight is against Nazism, which is completely ridiculous,” said Karsenty.

Samuels doubts that he’ll advance to the second round but fears his party will remain a political force. “Zemmour’s not going to win the presidency, but he may win at the local and regional level, and that will be very bad.”

But as intense are his haters, so are his French lovers.

Said Amsellem: “I say there’s never been so much enthusiasm for a Jew in France since Jesus.”