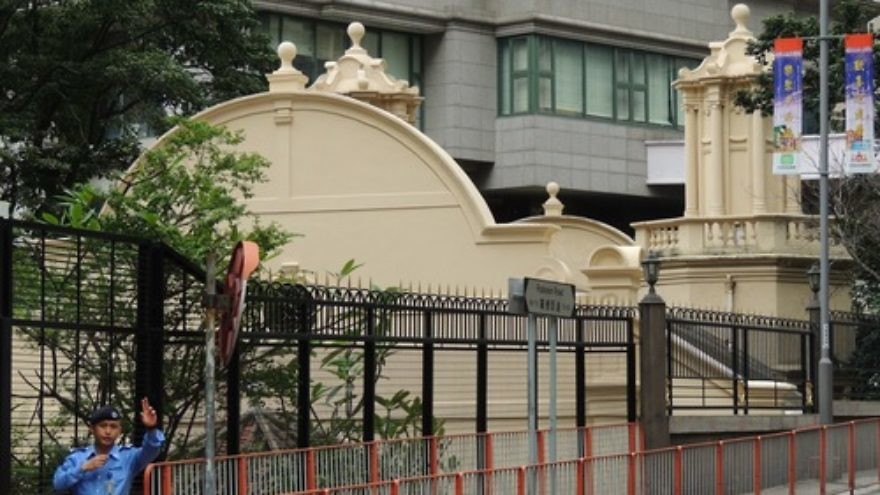 HONG KONG—A taxi ride to 70 Robinson Road in Hong Kong, the address listed for the Ohel Leah synagogue, ends with a simple question: Where is the synagogue?

The driver had understood the destination request. But this was a street of high-rise residential towers. There is no synagogue in sight. A quick look around reveals a heavy security checkpoint. “We’re looking for the synagogue,” I ask the uniformed officer. He motions towards the metal detectors and initiates the thorough, strict security check. A passport needs to be presented, and a series of questions need to be answered. Every item is inspected and x-rayed before entry is allowed.

Once cleared, visitors enter an elevator that descends to the halls of the Jewish community center. At one end an Israeli teacher, Dr. Ayelet Zamir, is dismissing her class. The teacher and I exchange a greeting of “Shalom” and a few sentences in Hebrew—she is from Petach Tikvah, a city in central Israel. Zamir directs me to the synagogue grounds.

To step into the courtyard of Ohel Leah is to enter an oasis in time. A fortress of tall residential towers surrounds the historic structure. Only a staircase in back of the synagogue, leading to Robinson Road, joins the space to the outer world.

Robinson Road is now filled with luxury residential towers, but the congregation continues to be housed in its 110-year-old structure. A restoration and renovation project, initiated in 1997, took a full year to complete. The synagogue rededication was held in 1998, and in 2000, UNESCO cited the work as an “Outstanding Project for Cultural Heritage Conservation.”

The presence of a Jewish community in Hong Kong dates back to the mid-19th century, when traders from Iraq and India first came to the island after the Opium Wars of 1839-42. As the next century approached, the growing community recognized the need for a permanent synagogue. Ohel Leah’s major donors, the Sasson family, requested that the synagogue be named in memory of the family matriarch, Leah Gubbay.

In 1905, the Kadoorie family, a distinguished Hong Kong Jewish family, gifted the community with a “Jewish Recreation Club” built on the synagogue’s grounds. During the next four decades, the Jewish population of Hong Kong—largely Ashkenazi Jews escaping from Russia and Eastern Europe—continued to grow.

The Ohel Leah synagogue was dedicated in 1902. In the decades since, the area surrounding the synagogue became prime residential property. When Ohel Leah found itself facing economic challenges, a decision was made to preserve the synagogue by developing the land surrounding it. The complex now includes a community center, including a Jewish day school, kosher meat and dairy restaurants, a kosher supermarket, a swimming pool, meeting rooms, and offices, all incorporated into one of the two towers that now surround the historic synagogue.

Rabbi Asher Oser, who was appointed senior rabbi of Ohel Leah in 2010, was ordained at Yeshiva University in New York. Prior to coming to Hong Kong, he interned at Park East Synagogue in New York and served congregations in Norwich, Conn., and Providence, RI. The rabbi and his wife Rachel, an experienced educator, have three children. Rabbi Ariel Zmir, who was once a tank commander in the Israel Defense Forces, is Oser’s assistant.

The modern Orthodox congregation draws a diverse crowd and leads a vibrant Jewish life, maintaining tradition and welcoming travelers. A minyan on a recent afternoon included local residents, an Orthodox business traveler from Brooklyn’s Borough Park neighborhood, and a Conservative realtor from Manhattan. The 200 families who are members of Ohel Leah come from 17 different countries.

Hong Kong is also home to Hechal Ezra-Kehilat Zion, a Sephardic synagogue that provides a spiritual home away from home for more than 5,000 Jewish travelers passing through Hong Kong. Eighteen years ago—at the direction of Rav Ovadia Yosef, the former Sephardic chief rabbi of Israel—the congregation was founded to serve the Jewish community on the Kowloon Peninsula. The synagogue welcomes all Jews, “whether Sephardim, Ashkenazim, or Hasidim,” according to its fundraising literature. “Everyone can experience the beauty of unity while celebrating the unique individuality of fellow Jews,” the literature says.

Hechal Ezra-Kehilat Zion is housed on the upper floor of a shopping mall. But its sanctuary is anything but commercial, as the traditional wood paneling adorning its walls creates a warm and welcoming atmosphere.

The congregation’s cantor, a young Israeli from Jerusalem, was on premises during my visit. He extended warm greetings and inquired about several New York City-based cantors. In fact, Hechal Ezra-Kehilat Zion’s international connections are quite apparent. Two members of its fundraising committee list New York phone numbers in the synagogue’s literature.

Additional Hong Kong Jewish resources include Shuva Israel, another Sephardic congregation, which was established during the 1990s and has a kosher restaurant on premises. The United Jewish Congregation, a Reform synagogue with about 170 families, was founded in 1988 and is led by Rabbi Stanton Zamek, who came from Louisiana. Rabbi Mordechai Avtzon and his wife, Goldie, lead Hong Kong’s Chabad-Lubavitch presence. Chabad has been in Hong Kong since 1987, and now has three centers there.