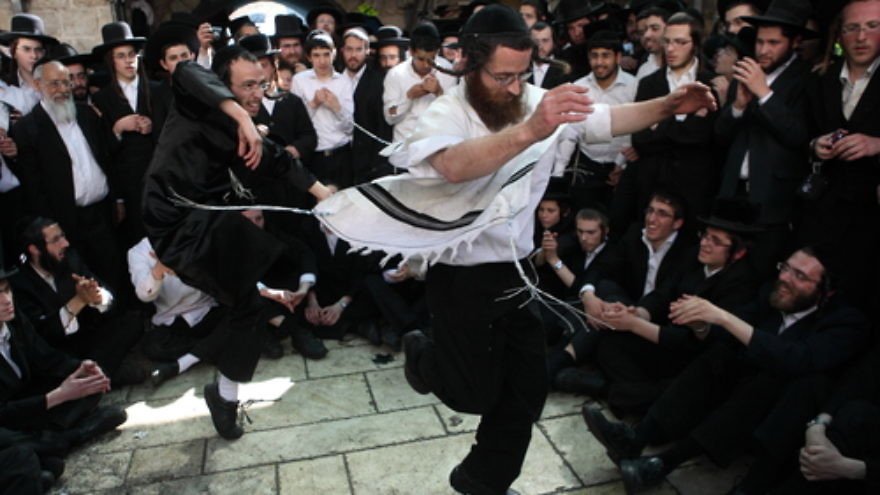 Orthodox Jewish men dance as they take part in celebrations of the Jewish holiday of Lag B'Omer at Mount Meron in northern Israel on May 22, 2013. Credit: Yaakov Naumi/Flash90.
Republish this article
1086 WORDS
Spread the word.
Help JNS grow!
Share now:

(April 22, 2014 / JNS) One of Pnina Newirth’s earliest childhood memories is of a trip to Mount Meron on Lag B’Omer. But this was no ordinary family vacation.

“I was very small, yet I vividly recall the huge fires and the immense crowds,” she says.

Despite the cacophony and the roaring bonfires, the Ra’anana resident insists she felt no fear that day.

“I knew my parents were there and would protect me. And we stood far enough back so give us a bit of distance,” Newirth recalls.

That moment was more than three decades ago, long before the tradition of spending Lag B’Omer in Meron took a greater hold on Israel’s populace. Though it was once the exclusive purview of the Hassidic sects, the celebration has now grown to attract Israelis of every stripe. Think Times Square on New Year’s Eve—only without the snow or Dick Clark, and with bonfires and sharp scissors.

These days tens of thousands of Israelis (estimates have ranged from 75,000 to 250,000 in recent years) turn out in Meron, just outside the northern city of Safed (Tsvat), each Lag B’Omer to mark the yahrzeit of Rabbi Shimon Bar Yochai, the Talmudic sage who is traditionally credited for Judaism’s leading source of Kabbalah and mystical wisdom—the Zohar.

But the day—marked by the bonfires of Newirth’s childhood, along with singing and dancing—is more celebration than mourning. In fact, the holiday also marks the end of the deaths of Rabbi Akiva’s 24,000 students who, tradition has it, had been dying due to a lack of mutual respect. It is in this mood of joy that observant Jews take haircuts, listen to music, and hold weddings after more than a month of restrictions following Passover. Beginning on Lag B’Omer, the 33rd day of counting the Omer and the 18th day of the Hebrew month of Iyar, joy continues to mount, culminating two weeks later when Jews around the world celebrate the receiving of the Torah on Shavuot. Many Sephardi Jews continue mourning practices through the 33rd day of the Omer and celebrate on the 34th day of the Omer, or “LaD BaOmer.”

Around Israel, there are parades, picnics, and bonfires. But tiny Meron is the undisputed capital of all this happy Lag B’Omer mayhem.

With this massive crowd gathered in a normally pastoral setting far from the nearest hospitals, along with the equally massive bonfires and the sharp scissors (more on those later), more than 1,200 police officers are on hand. So too are countless paramedics, firefighters, and ambulance crews for the inevitable incidents of smoke inhalation, burns from the bonfires, and the usual warm-weather crowding threats such as dehydration and fainting.

Three years ago, Richard Schabb of Kfar Adumim was among the throng making the Lag B’Omer pilgrimage to Meron, an adventure that proved not for the faint-of-heart—or the claustrophobic. He and his stepson left at 1 a.m. to leave plenty of time to make it there in time for the festivities, bearing in mind the expected traffic jams.

Arriving by bus at the crack of dawn, they found an “astonishing carnival atmosphere that can only be attained by people who have been partying all night.” The sun was barely up but the crowds were already there, Schabb recalls.

“People were everywhere, taking up every square foot of space talking, eating, davening or just taking in the show,” says Schabb, adding, “There was also a band whose Jewish dance music was booming over loudspeakers. Maybe it was little like being at a Jews-only Woodstock.”

Only, unlike that storied 1969 rock extravaganza in Bethel, NY, here there was a giant bonfire, in the middle of the roof between the men’s and women’s sections, stoked by a couple of Hassidic Jews in long black coats. Soon Schabb was swept along with the growing crowd, “feeling like what a sardine must feel like inside a can.”

“I had had enough, except there was no way out,” he says. “It was wall-to-wall Jews all the way out to the doorway on the other side of the courtyard—probably a good half hour trip. Luckily, everybody was in a good mood, even, to a certain extent, me. And the music helped.”

The ending of Schabb’s story is a happy one. After a few more minutes of struggling against the human tide, he was able to squeeze through the impasse into an open area filled with kiosks supplying all kinds of food, free for the taking. The coffee, pastry, and scrambled eggs renewed him enough to try for Rabbi Shimon Bar Yochai’s tomb.

“Squeezed so tight it was hard to keep both feet on the floor,” Schabb describes, he made it to a larger room with a high ceiling, and was able to catch his breath and reach over the backs of the three people in front of him, and actually touch the velvet cover of the tomb. He says he worked his way back out again, only after “communing with the rebbe (Bar Yochai) and thanking God that He had gotten me this far without being crushed.”

Sounds like the kind of environment where one would not wish to be carrying sharp scissors.  But each year, hundreds of parents arrive with them in tow for the purpose of administering first haircuts to their 3-year-old sons, a custom known as the upsherin or chalaka.

Given the ancient tradition not to cut a boy’s hair until he is 3, this first haircut marks the leap from babyhood into boyhood for the Orthodox, signaling a time when the boy begins to learn the Hebrew alphabet and wear a yarmulke and tzitzit. As family members and friends each take a snip of baby hair, the youngster is often distracted—and rewarded for standing still—with a parade of sweets.

But with Meron on Lag B’Omer being such a balagan, would Schabb go again? “Yeah, I would go again,” he says good-naturedly. When asked if she would consider taking her children today, however, Pnina Newirth answers with a laugh and a “Mamash, lo!” (Really, no!)

“I hear it’s gotten much bigger and much crazier now,” she says.

Nevertheless, Newirth doesn’t deny her kids the spirit of Lag B’Omer. Last year, for instance, the family went to Kiryat Sanz in Netanya, where there are also massive bonfires and thousands of Hassidim jumping and singing.

“It was an amazing, amazing sight,” Newirth says. “I would absolutely do that again.”