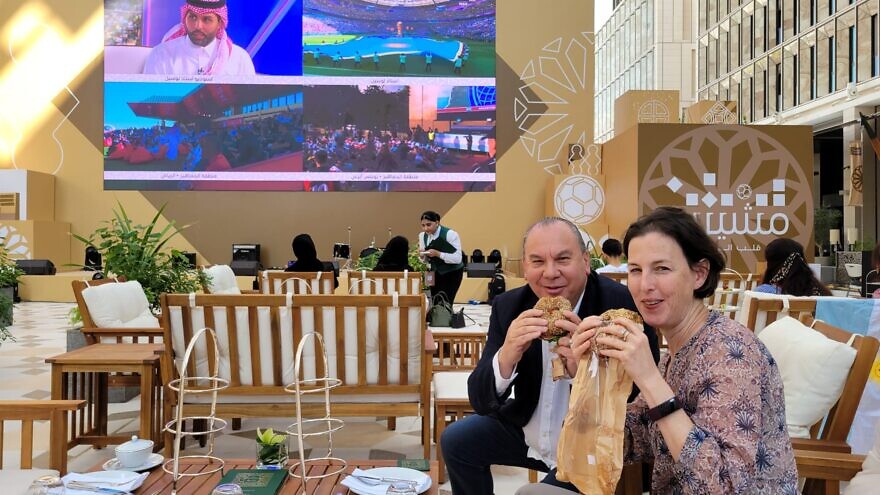 (November 23, 2022 / JNS) While Qatar can hardly be considered a friend of Israel, harboring as it does Hamas and other Islamic extremists and pouring millions into the Gaza Strip, when it comes to Jews visiting the country for the FIFA World Cup it has been very accommodating, contrary to early reports which painted the country as obstinately refusing to supply kosher food and prayer spaces.

Early reports that Qatar had gone back on its word to permit hot kosher food and Jewish places of worship were “wildly” off base, Rabbi Marc Schneier, president of the New York-based Foundation for Ethnic Understanding, which focuses on improving Muslim-Jewish relations, told JNS.

A well-known figure in Muslim states, Schneier was asked by Qatar’s leadership to help them prepare for Jewish fans coming to the World Cup, which kicked off on Nov. 20 and continues for a month.

Schneier said the rumor mill started when one paper reported that Qatar wasn’t allowing “cooked kosher food.” That story was picked up by the Hebrew press, which “took out the word ‘hot,’ and then started the rumor that the Qataris banned kosher food altogether.

“I sent them the photographs and not only were they embarrassed, they were apologetic,” he said. “They’ve all retracted their stories.”

“In terms of hot food, it was our decision,” he said. “If I wanted to have hot food, trust me, the Qataris would have supported it 150%.” Schneier said he kept it to bagel sandwiches because he had no idea what kind of demand there would be. “There’s no local Jewish population. You can have one person asking for kosher food, or 100 people. No one knows.”

Schneier worked with Hassan Al Thawadi, secretary general of the Supreme Committee for Delivery and Legacy, to ensure Jewish fans would feel welcome. He said there were three issues: 1) ensuring access to kosher food; 2) making all Jews feel welcome, Israelis among them; and 3) direct flights from Israel to Doha. “They delivered on all three,” Schneier said.

“We have a kosher kitchen thanks to the generosity of Akbar Al Baker, who is the CEO of Qatar Airways. QA gave their VIP kitchen.…It’s kosher for 30 days,” Schneier said.

Rabbi Mendy Chitrik, chairman of the Alliance of Rabbis in Islamic States, which serves some 100,000 Jews in 14 Muslim-majority countries, told JNS he came on Nov. 17 from Istanbul to make the kitchen kosher. His son, Rabbi Eliyahu Chitrik, remains in Qatar to supervise.

The kitchen offers bagel sandwiches and will be baking fresh challahs for the Sabbath. Mendy Chitrik said there are two main reasons for the limited fare, none of which has anything to do with the Qataris imposing limitations. First, there was the aforementioned issue of unknown demand. Second was the heat. “We hand deliver the sandwiches. Dairy is perishable. Hummus and other spreads won’t get ruined in the heat so fast. So what we’re offering is vegetarian.” 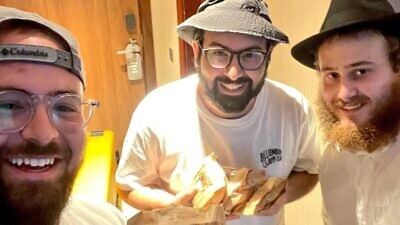 He said the kitchen makes about 100-150 bagel sandwiches a day and they’re finding customers. People looking for kosher call his son directly or reach out through WhatsApp. Of the labels sealing the sandwiches, Chitrik said, “It’s definitely the first time that a product says, ‘Produced in Qatar by supervision of a rabbi.’ ”

The Chitriks also set up an Instagram account, Kosherinqatar. They post images of kosher food available in the country’s supermarkets. “Anybody [who keeps kosher] who goes to Doha is not staying hungry,” Mendy Chitrik said.

A second misreported item had to do with prayer spaces for Jews. According to early reports, a Qatari promise to afford Jews places to pray went unfulfilled. Schneier said there never was such a promise and he never made a request for prayer spaces.

“I know what it’s like to maintain a daily minyan in the months of December, January, February,” said Schneier, who heads The Hampton Synagogue in Long Island, New York. “It’s a responsibility to say you’ll have a minyan.”

He offered the example of someone coming to say Kaddish, a prayer required by Jews during a period of mourning, and which necessitates a minyan, or quorum of 10 men. “I was not going to take on that kind of responsibility in a city where there’s no indigenous Jewish community. That’s why I never raised that issue.”

Chitrik said that he and his son prayed in a mosque, which is permitted according to Jewish law. “We were there in the morning in the hotel. We asked, ‘Is there a place to pray?’ They said, ‘Yes, go downstairs to the mosque.’ We didn’t pray in the mosque but at the entry of the mosque, only because we didn’t want to take off our shoes. But people coming in and out of the mosque were greeting us, asking us what we were doing. We said, ‘Praying,’ and they said, ‘Fine.’” 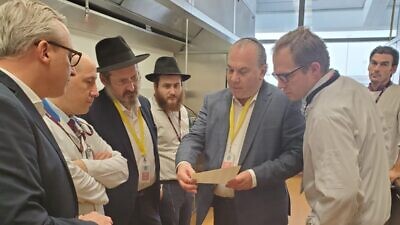 “Muslims understand. When they go to Europe, they’re looking for a mosque to pray. They can appreciate an observant Jew also looking for a place to pray,” he said.

Chitrik admitted it would have been nice to have a designated prayer space but said such things can’t be rushed. “It’s step by step. Sometimes people have to get more comfortable with the Jewish presence.”

Chitrik and his son walked around Doha dressed in Orthodox clothing without experiencing any problems. He acknowledged that some Israeli reporters were being harassed by people chanting and waving Palestinian flags in the background while they made their reports. While not downplaying it, he also said that with a million people coming to Doha, it’s impossible to know if those people come from Qatar.