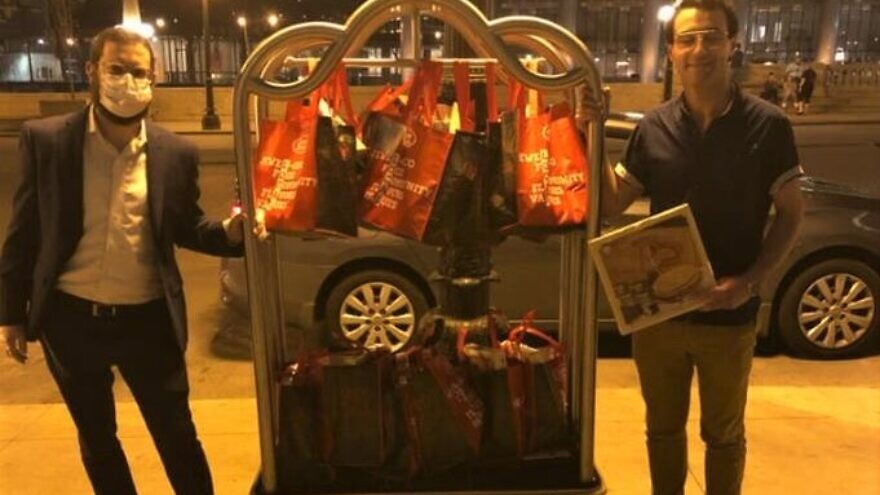 A volunteer from Lubavitch Chabad of Illinois delivers “Seder in a Box” kits for Jewish medical staff, who are treating 3,000 coronavirus victims at a makeshift hospital in the McCormick Place Convention Center in Chicago, April 7, 2020. Credit: Chabad.org/News.
Republish this article
581 WORDS
Spread the word.
Help JNS grow!
Share now:

(April 8, 2020 / Chabad.org/News) When the State of Illinois and the city of Chicago decided to transform the largest convention center in North America into a field hospital to stem the flow of patients suffering from the coronavirus (COVID-19), Passover plans for the Jewish personnel was not the first thing on their minds.

Thanks to Lubavitch Chabad of Illinois and the Walder Family Foundation, that’s taken care of.

McCormick Place, a cavernous facility consisting of four interconnected buildings and one indoor arena sited on and near the shore of Lake Michigan, about 2 miles south of downtown Chicago, is regularly home to numerous trade shows and meetings. But with the social-distancing rules in place across the state, it has sat empty for weeks.

As the number of coronavirus patients ticked sharply upwards in the Chicago area, Gov. J.B. Pritzker and Chicago Mayor Lori Lightfoot announced on April 3, that it would be converted into an emergency facility for up to 3,000 patients.

The governor and mayor put out a call for medical professionals, and very soon, these good souls began streaming in to help staff the emerging facility.

With the holiday of Passover right around the corner, a few of the Jewish imports reached out to the local Chabad rabbi, Rabbi Mordechai Gershon of Chabad of the South Loop, inquiring after their Passover seder needs. Gershon, in turn, forwarded the requests to the regional offices of Lubavitch Chabad of Illinois, and though the hour was late and the need stretched well beyond conventional resources, Chabad was up for the challenge.

‘Cater to their needs’
Rabbi Avraham Kagan, director of government affairs for Lubavitch Chabad of Illinois, had already been in close contact with the mayor’s office since the beginning of the crisis when this new request surfaced, Kagan immediately contacted Vance Henry, chief of faith engagement from the office of the mayor to see how he could help.

“Mr. Henry immediately put me in touch with the people coordinating the efforts to set up the hospital until I was eventually directed to the staffing company, which helped us identify the Jewish staff members. From there, we were able to gauge the amount of resources we would need to marshal to cater to their needs,” said Kagan. Together with the governor’s office, the mayor’s office was fully engaged in the effort to provide for the Jewish personnel.

Lubavitch Chabad has so far arranged and distributed more than 2,000 “Seder in a Box” kits for residents of the state, coordinated by Chaya Epstein of Beis Menachem Chabad in Chicago and ably catered by Linda Neiman of Zelda’s Caterers. Already stretched to capacity, the sudden influx of new requests from these medical imports was a daunting request.

“We approached the Walder family, who immediately agreed to fund the effort,” said Rabbi Meir Shimon Moskowitz of Lubavitch Chabad headquarters. Indeed, Epstein and her contacts at Zelda’s Caterers did the impossible, and by Sunday, a fully prepared slew of “Seder in a Box” kits were ready to be distributed to the staff at McCormick Place.

Far more than just matzah and wine, these kits are fully prepared meals for the one privileged to open it. They include a seder plate, fish, chicken and brisket—everything needed to taste the tradition of Passover, wherever the person may be.

“It was a last-minute effort,” said Kagan. “But when someone calls Chabad for any Jewish need, we’re there to serve them.”

This article originally appeared on Chabad.org/News.