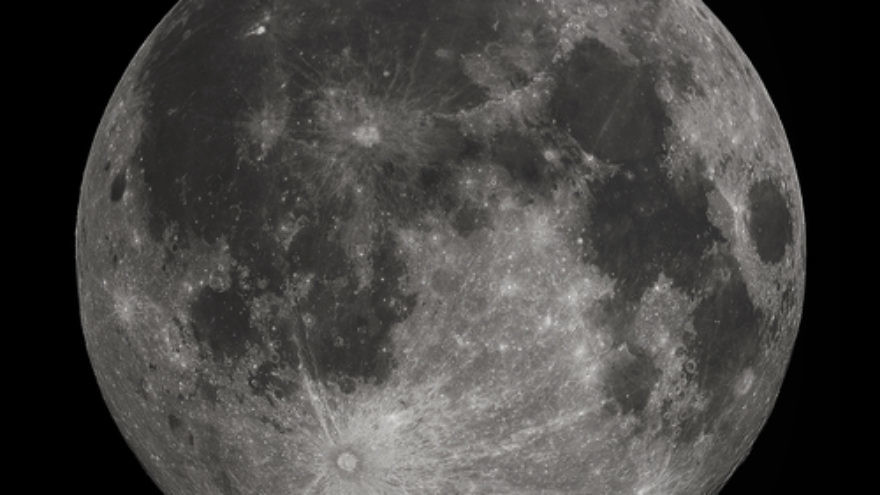 The moon. In the Hebrew calendar, the months represent the course of the moon, but must be aligned with the seasons of the year. This year is a leap year on the Hebrew calendar, with two months of Adar instead of the usual one. Hebrew leap years occur seven times every 19 years. Credit: Gregory H. Revera via Wikimedia Commons.
Republish this article
1497 WORDS
Spread the word.
Help JNS grow!
Share now:

No, it isn’t nearly as rare as “Thanksgivukkah,” the once-in-75,000-years overlap of the first day Hanukkah and Thanksgiving Day that took the Jewish world by storm in 2013. But this year’s 13-month Hebrew calendar isn’t an annual occurrence, either.

As February turns to March on the Gregorian calendar this year, the Hebrew month of Adar Aleph transitions into Adar Bet, which began March 3. The incidence of a second Adar, representing a Jewish leap year, comes up seven times every 19 years on the Hebrew calendar.

Traditional lore attributes the standardization of the Hebrew calendar—in which the months represent the course of the moon, but must be aligned with the seasons of the year—to Hillel II, the leader of the Jewish Sanhedrin in the 4th century, but experts believe the evolution of the calendar was much more gradual.

“The Bible contains some basic references to solar and lunar elements, but it does not lay out clear rules. Over time, these emerged, and by the rabbinic period the calendar looked very similar to the one we use today, although there were sectarian groups who did not accept it and had their own traditions of calendar rules,” Elisheva Carlebach, professor of Jewish History, Culture and Society and Columbia University in New York City, told JNS.org. Carlebach is the author of “Palaces of Time: Jewish Calendar and Culture in Early Modern Europe.”

Sasha Stern, head of the Department of Hebrew and Jewish Studies at University College London and author of “Time and Process in Ancient Judaism,” told JNS.org that “a lot of people use the word ‘lunisolar’ to indicate that the calendar is regulated by the moon (which defines the beginning of the month) as well as by the sun (which demands the addition of 13th lunar month every two or three years).”

But a core aspect of the original establishment of a Hebrew calendar was the need to determine the timing of biblical and religious holidays, such as Passover, Yom Kippur, and Rosh Hashanah. Later, non-biblical holidays such as Purim and Hannukah, and even Israeli Independence Day, were added to the calendar.

“In the Jewish calendar, the addition of a 13th month is required for keeping up with the seasons (e.g. spring for Passover), not with the sun,” he said. In meteorology, the schedule of the seasons does not quite correspond with the movement of the sun.

Therefore, Stern believes the term “lunisolar” is actually a misnomer.

The lunar year is 12 lunar months of an average of 29 and a half days each, with a total of approximately 354 days in a year, Stern explained. “This falls short of the seasons by about 11 days,” and thus “an extra month needs to be added every two or three years in order to make up for this and keep up with the seasons,” he said.

The ancient Israelite calendar was therefore most likely lunar, with 12 months in the year, each of which begins with a new moon. Stern said all lunar calendars in the world “have always added a 13th (leap) month,” with the exception of the Islamic calendar.

According to Rabbi Menachem Posner, one of the rabbis on the team of “Ask The Rabbi” responders on Chabad.org, the practice of adding a 13th month was once performed by the Great Court in Jerusalem on a case-by-case basis, with an extra month being inserted whenever the rabbis saw that Passover was getting too early or saw the need to delay it for other reasons.

“In the modern Jewish calendar, this has been placed on autopilot following a predetermined 19-year cycle,” he said. “This means that the extra Adar is added every two or three years.”

Another Hebrew calendar is mentioned in some documents from the Hellenistic and early Roman periods, as well as in the books of Enoch, Jubilees, and the famous Dead Sea Scrolls. This non-lunar Hebrew calendar had a fixed year of 364 days—exactly 52 weeks. The festivals recurred every year on the same day of the week. This is the earliest Jewish calendar described explicitly in any Jewish text, but the degree of its actual use at the time is unknown, and it seems to have died out.

After the Babylonian exile and the destruction of the first Temple, Jews adopted the Babylonian calendar, from which the names of the modern Hebrew months originate.

The lunar Hebrew calendar, as influenced by the Babylonian calendar, prevailed for centuries, but various Jewish communities did not always agree on when the months began, depending on who first saw the full moon. Holidays were celebrated at different times by different Jewish communities.

Experts believe that after the rise of Christianity, the Christian and Hebrew calendars both influenced each other. The Christian Easter holiday originally took place at about the same time as the Jewish Passover, but eventually came to be calculated separately. This also influenced the evolution of the Hebrew calendar from one based on new moon sightings to one based on a calculation.

Additionally, for centuries since the Middle Ages, “calculating the date of Easter and trying to separate that calculation from direct dependence on the Passover of the Jewish calendar occupied the energies of great Christian theologians,” Columbia’s Carlebach said.

“In order to have society marching in synchrony to the music of time (for festivals,  new years, to honor contracts, etc.) there has to be a means of disseminating calendars,” Carlebach said.

Carlebach describes in her book that following the 15th century in Europe, Jews began to treat calendars not only as conceptual measurements of time, but as material things. Manuscripts of the Hebrew calendar began to circulate in various forms. The printing revolution allowed for the reprinting of the calendar, not only by Jews but also by Christians.

In addition to the calendars themselves, other materials circulated such as “Ibburim,” which explained how to compute the exact times of the the solar equinox and solstice. The first printed Ibbur was actually edited by a Catholic calendar expert, Sebastian Münster. In his partially translated edition, he included a standard Catholic Latin calendar that contained both Saints Days, and the names of the Jewish months in Hebrew in the margins. Later, many Protestants judaized their calendars by giving the names of Jewish months equally prominent placement as the names of the Christian months.

The Jews took note of Christian holy days in their calendars, both to avoid potential acts of persecution, which tended to occur more often on holy days, but also to trade with Christians, whose market fairs often took place on holy days.

“There are parapegma from ancient Judea, calendars etched on small stones; calendars could have been incised on wood; there are many medieval calendars on parchment and later on paper. Today there are calendars on our phones and on the Internet. The medium is less important than its durability for the time it is needed and its portability,” Carlebach said.

Besides the well-known incidence of “Purim Katan,” Hebrew leap years can present some interesting scenarios, such as the challenge of calculating birthdays. For example, Posner asked, if a boy was born in a regular year but his bar mitzvah falls on a leap month, “When does he reach the age of majority?”

“In practice we do not count him for a minyan or call him up for an aliyah to the Torah until after his Adar II birthday. However, because of the possibility that the boy reached adulthood in Adar I, he should begin laying tefillin in Adar I,” said Posner.

On yahrtzeits, or anniversaries of the passing of loved ones, “some people mark them only on Adar I and others mark them just on Adar II,” Posner noted.

“Since this is a contested issue, many observe yahrtzeit twice [during a leap year],” he said.

While the age-old intricacies of the Hebrew calendar aren’t novel, the calendar is gaining newfound relevance in Israel today through a Knesset bill that was approved in a preliminary reading Feb. 26. The bill stipulates that official identification issued to Jewish citizens by a public authority should use Hebrew calendar dates, instead of the Gregorian dates commonly used worldwide.

Member of Knesset Elazar Stern (Hatnua) said regarding the bill that the Hebrew calendar “is an integral part of the history of the Jewish people,” Israel National News reported.

“This bill, which would increase the use of the Hebrew date, is another step in strengthening Jewish democratic character of the state of Israel,” Stern said.