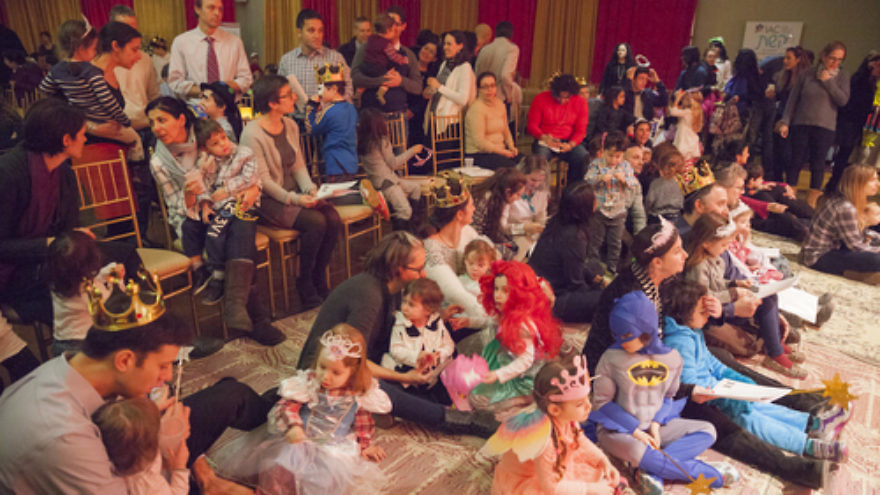 The Israeli-American Council's "Shishi Israeli" event to usher in Shabbat, held March 27 in New York City as part of the new Hagigah Ivrit culture series. A collaboration of the Israeli-American Council, the Steinhardt Foundation for Jewish Life, and the Council for Hebrew Language and Culture, the Hagigah Ivrit provides a platform for individuals and families seeking to both learn the Hebrew language and deepen their connection with Israel. Credit: Larson Harley.
Republish this article
1131 WORDS
Spread the word.
Help JNS grow!
Share now:

When a united humanity speaking the same language tried to build a tower to reach the heavens, God confounded their speech. But in the early days of modern Israel, a clash of tongues made life difficult—until Hebrew became “the glue that brought the people together,” says Rabbi Eliezer Ben-Yehuda, grandson of the “Father of Modern Hebrew” bearing the same name.

“Imagine if David Ben-Gurion had delivered the 1948 Declaration of Israeli Independence in Yiddish. Israel would not only be a different country, but Israelis would know a different existence,”Rabbi Eliezer says last month in New York City at the first event of a new initiative called “Hagigah Ivrit”—a cultural series and festival featuring educational lectures, film screenings, Israeli music, art, and social activities for children and adults.

A collaboration of the Israeli-American Council (IAC), the Steinhardt Foundation for Jewish Life, and the Council for Hebrew Language and Culture, Hagigah Ivrit provides a platform for individuals and families seeking to both learn the Hebrew language and deepen their connection with Israel.

Framing the cultural series thematically, Rabbi Eliezer describes how the life and times of his grandfather highlights the fundamental magic of Hebrew. The elder Ben-Yehuda insisted that his wife speak only Hebrew around their children. He spent his family’s meager savings on a start-up newspaper in which he published articles in Hebrew and provided lists of newly invented words, eventually creating the first Hebrew dictionary.

Initially, Israelis were resentful of Ben-Yehuda’s efforts to modernize Hebrew, yet curious to learn each neologism he published. His grandson sings verses from an Israeli folk song that pokes fun at his grandfather’s legacy: “Eliezer Ben-Yehuda, an amusing man, words upon words he invented in his feverish mind.” He notes that it was never easy growing up a “Ben-Yehuda” in Israel due to high expectations for his grandfather’s progeny.

“Of course Ben-Yehuda is going to write a good paper,” the rabbi recalls his jealous peers taunting him at school. His frustration hints at a larger controversy that originally surrounded his grandfather’s mission to establish Hebrew as the official language of Israel and the Jewish people.

“The controversy was that Ben-Yehuda had the audacity to think that people would take up a God-forsaken language,” Rabbi Eliezer says. For all practical purposes, Hebrew was obsolete until his grandfather revived and modernized the lexicon. Rabbi Eliezer makes a distinction, elevating the historical significance and originality of Hebrew.

“My book is not a bible, it’s a tanakh,” he says. “People who read the New Testament think they understand the first words, ‘In the beginning,’ but, in fact, they are reading a translation.” Thanks to Eliezer Ben-Yehuda, Jews today have unprecedented access to their shared heritage. Hebrew is “organic, growing, and changing all the time,” but it is still the most enduring element of Jewish culture, Rabbi Eliezer observes.

The Hagigah Ivrit event shed light on many current Hebrew language and literary achievements. Israeli author Assaf Gavron presented his new book, “The Hilltop,” a novel depicting the complicated reality of life in the West Bank. Later, Reuven “Ruby”Namdar, resident New Yorker and esteemed recipient of Israel’s Sapir Prize for Literature, spoke about the experience of writing in Hebrew while living in an English-speaking environment. The series also featured a Hebrew poetry contest involving students from 30 Jewish day schools across North America.

The IAC’s mission statement calls for initiatives that “build an engaged and united Israeli-American community that strengthens our next generations.” Participants who attended the IAC’s Shishi Israeli event, which ushered in a Shabbat during the culture series on Friday, March 27, could see that community taking shape. Billed as an event in which “Israeli and Jewish Americans will create a shared experience around the Shabbat dinner table,” families of all ages and backgrounds were in attendance. Numerous arts activities kept young children happily engaged, while actor, singer, and songwriter Shira Averbuch led a band, singing classic and popular Hebrew songs.

The IAC “didn’t have to spend a lot on advertising” for Hagigah Ivrit, but rather word of mouth among the area’s Israeli American community was the primary marketing vehicle, says Yehudit Feinstein-Mentesh, the organization’s regional director in New York.

“It becomes like a family,” she tells JNS.org. “Everybody brings something and in this way we’re creating a community that takes care of itself.”

Sharon Eyny, IAC’s director of programs and events, says, “The idea, especially on [New York City’s] Upper West Side—where there is a big Israeli community—is to bridge Jewish American and Israeli communities. They don’t usually do things together.”

Eyny notes that 2nd and 3rd-generation immigrants from Israel are nostalgic for elements of the culture they left behind. American Jews, likewise, are curious about Israeli customs and desire an authentic experience. The IAC’s monthly Kabbalat Shabbat dinners are successful, Eyny suggests, because the structure is unimposing.

“There are no lectures, it’s not about giving money, or religion. It’s simply about enjoying being Jewish and Israeli culture,” Eyny tells JNS.org.

Perhaps Averbuch, who was born to Israeli parents but grew up in the U.S., best personifies the IAC’s bridge between Jewish American and Israeli culture. Watching her perform, Feinstein-Mentesh comments, “She never felt home until she came here.” Averbuch was center stage throughout the cultural series, entertaining audiences of more than 700 people as she narrated the story of “Peter and the Wolf” in Hebrew with orchestral accompaniment.

Averbuch is influenced by the work of artists including Israeli greats Chava Albertstein, Arik Einstein, and Yael Naim, as well as American singers Johnny Cash and Willie Nelson. Taking her music on the road, she served in the Israel Defense Forces band during the 2006 war with Lebanon.

“It’s a beautiful thing to see how music can completely change a situation,” Averbuch says, explaining how her troop would visit families confined to shelters and sing Hebrew songs to lift morale. At one stop, “a little girl held my leg,” she recalls.

Despite this somber moment, Averbuch laughs when she pictures her fellow soldiers wearing helmets and carrying guitars through the war zone. Likewise, she finds the Israeli army’s ban on English songs amusing.

“That’s the patriotism they try to instill,” she jokes.

Rabbi Eliezer Ben-Yehuda, however, likely would see this regulation as an element of his grandfather’s legacy. Establishing a Jewish state required stubbornness and pride in a common language. As a result, at Israel’s 67th birthday, modern Hebrew is providing the necessary mechanism—a common language—for Jews around the world to connect with each other.