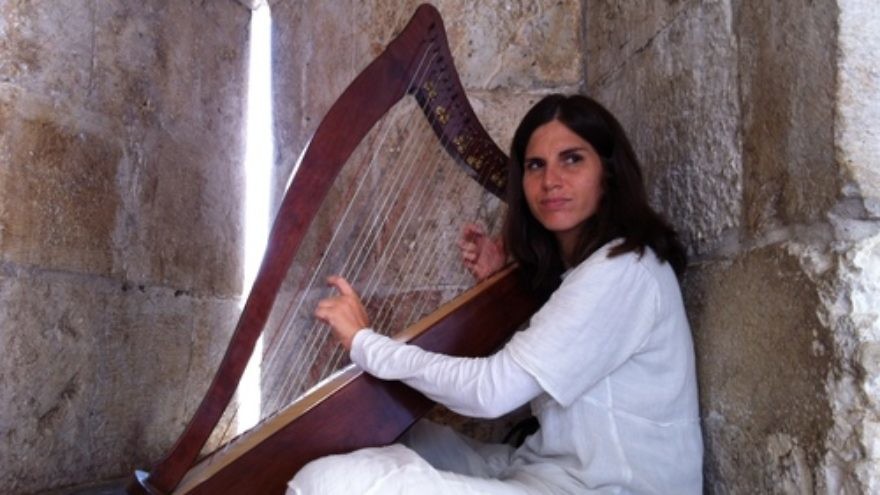 Herut Shitrid vividly recalls the first Yom Kippur she fasted at age 10. “I felt proud,” she says nearly two decades later. “I was so proud that I could do it.”
Republish this article
1012 WORDS
Spread the word.
Help JNS grow!
Share now:

Herut Shitrid vividly recalls the first Yom Kippur she fasted. She was only 10, but somehow she was able to make it through the whole day.

“I felt proud,” she says nearly two decades later. “I was so proud that I could do it.”

These days, Shitrid spends much of her time serenading with her harp the passersby at Jaffa Gate in Jerusalem’s Old City. But back when she was growing up in the southern Israeli city Beersheba, fasting on Yom Kippur was one way to emulate the adults’ process of teshuva—to repent, or to return to your faith and your highest self.

“If we’re asking God to delete our sins, we have to show Him we’re willing to sacrifice a little bit,” Shitrid tells JNS.org.

Indeed, that sense of overcoming our own bodily needs to invest every moment of the day in the act of repentance is one of the mainstays of the fasting experience. But afflicting ourselves comes in a number of forms. In addition to not working and eschewing food and drink, Jews on Yom Kippur traditionally don’t wear leather shoes or any other leather garment such as belts and coats, etc.; don’t bathe, swim or wash; don’t use perfumes or lotions; and avoid marital relations.

Yom Kippur is a legal holiday in Israel, with no radio or TV, buses or trains, and certainly no shopping. (History buffs may recall that one Yom Kippur did see a broadcast: during the Yom Kippur War in 1973, to alert the Israeli citizenry to Egypt and Syria’s attack).

In today’s heavily secular Israel, along with bicycling on the (nearly empty) streets, fasting is one traditional observance that is stubbornly clung to—nearly three-quarters of Israelis planned to fast last year.  No wonder Israelis of all stripes wish each other a “Tsom Kal” (easy fast) or “Tsom Mo’iil” (beneficial fast).

Israelis, of course, are not alone in this practice. Regardless of what they do the rest of the day, many Jews fast on Yom Kippur. But why?

“When we walk around with a full belly, we develop a sort of haughtiness, a sense of self-satisfaction,” says Rabbi Avi Moshel of Jerusalem. “So in the 25 hours of fasting, we actually put ourselves in a state of humility.”

“Being hungry and thirsty reminds us that all we eat and drink, in fact, all we have in life, comes directly from God,” he adds. “The goal of the day is to bring ourselves down enough to sincerely ask for forgiveness, increase our awareness of God in our life and our commitment to hands-on Judaism, the religion of action.”

The idea is that the prayers and spiritual and emotional tasks of the day are so compelling that they wipe food (more or less) out of our minds. Rabbi David Aaron of the Jewish education organization Isralight likes to tell the story of the old-country rabbi who was asked by his students how many times a year he fasts. When he answered that he never fasts, they were shocked, asking, “You mean you eat on Yom Kippur?

“Eat on Yom Kippur? Of course not!” the rabbi shot back. “On Yom Kippur I am far too busy doing teshuva to even have an appetite!” The point, Rabbi Aaron tells JNS.org, is that “when we are truly in the spirit of these days, the desire for food just falls away.”

But who exactly should fast? Youngsters start fasting for real at bar/bat mitzvah age, but also beginning as young as age 9, Jewish tradition encourages children to postpone their meals a bit and skip the candy and ice cream treats.

Besides little kids, who shouldn’t fast on the holiest day of the year? Women in their first 72 hours after birth, certainly, and even those during the first week should work closely with their rabbi and doctor to determine how much fasting they should do. As for pregnant women, all those except for the ones having high-risk pregnancies are expected to fast. The others need to again coordinate with their rabbi, or doctor, or midwife.

Judaism insists that life comes first, and gives guidelines for the sick to take in needed sustenance while respecting the spirit of the fast. After checking in with their rabbi and doctor, they typically restrain themselves to 30ml of water or food (one fluid ounce) every 10 minutes or so to prevent dehydration and weakness. It’s usually suggested that they focus on simple high-protein foods which have more power to strengthen than empty calories. In the case of required medications, rabbis and doctors make provisions on a case-by-case basis.

In fact, Jewish tradition is ready for them. An ancient High Holiday prayer book provides this blessing for someone sick before eating on Yom Kippur:

“Behold I am prepared to fulfill the mitzvah of eating and drinking on Yom Kippur, as You have written in Your Torah: ‘You shall observe My statutes and My ordinances, which a man shall do and live with them. I am God. In the merit of fulfilling this mitzvah, seal [my fate], and [that of] all the ill of Your nation Israel, for a complete recovery. May I merit next Yom Kippur to once again fulfill [the mitzvah of] ‘you shall afflict yourselves [on Yom Kippur].’ May this be Your will. Amen.”

But with the vast majority of Jews fasting, there is another, less spiritual benefit to hosts and hostesses everywhere: the break-fast, when the most humble hard-boiled egg is lauded for its luscious perfection. You will never have such appreciative guests at any other time during the year!

Tips for an Easier Fast

Carbo Load. Don’t overeat the night before, and focus on complex (whole grain) starches and fruits and veggies to give you energy on the big day.

A good soak. Stay well hydrated in the days leading up the fast, as this reduces weakness during Yom Kippur.

Just say NO… To alcohol, coffee, and sodas in the two days before the fast, since these actually dehydrate you.