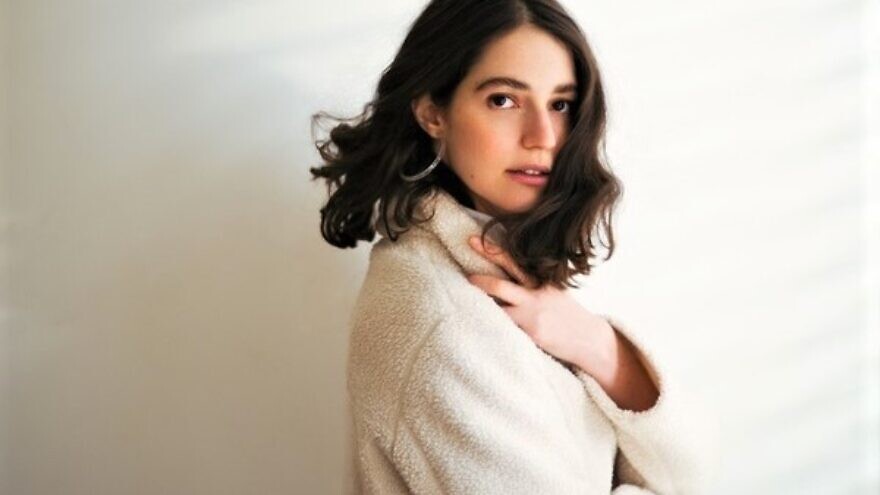 Kami Maltz can sound like a younger version of Joni Mitchell, who is one of her musical influences. Photo by Zohar Raft.
Republish this article
881 WORDS
Spread the word.
Help JNS grow!
Share now:

(August 31, 2022 / JNS) When she first moved from Tel Aviv to Brooklyn, N.Y., in 2013, Kami Maltz struggled to improve her English, but now her mastery of the language is clear in her work as a singer-songwriter. People are noticing. Maltz took the stage with her band on Aug. 18 at the Museum of Jewish Heritage–A Living Memorial to the Holocaust in Battery Park City as part of “Modern Jewish Sounds Concert: Kami Maltz and Friends.”

Maltz, 32, who said the show was her biggest to date, closed the concert with her best song, “It’s Just Your Heart,” in which she played the ukulele. The song, which includes the lyrics, “Well isn’t it clear, once you hit a valley, they all disappear,” is a perfect road-trip song that is infectious.

It sounds a little like a breakup song, but it’s not one in the romantic sense, explained the singer/songwriter, who combines folk, electronic and pop in her music.

“In Israel, people have their guts out for you to see what they think,” Maltz told JNS. “In New York, I had to see if some people wanted to use me for gain or were real friends that would show up. Some were real, but some didn’t show up for me when I thought they would, so people sometimes say things to try to get ahead.”

Maltz graduated from Alon High School in Ramat Hasharon, Israel, which required an audition for acceptance. Her mother plays the flute and her father the cello. Maltz plays the autoharp, which piqued her interest when she saw a Canadian artist use it.

She showed off those skills, as well as her vocal ability to effortlessly hit high notes, in a highly impressive cover of Joni Mitchell’s “Carey” with fellow musician Josh Turner. (The song has garnered more than 379,000 hits.) If this tune doesn’t lift your spirits, I’m not sure what will. In the show, Maltz also performed a silky-smooth version of Carol King’s “Just Call Out My Name.”

She said her family jokes that she is an old soul and could have lived in a previous century. Interestingly, she cites an episode of the show “Dr. Who,” where stone statues act like monsters and can send people back in time. It’s the inspiration for one of her songs, called “Weeping Angels.”

“I kind of see myself as a nerd,” she said. “I like reading books, watching sci-fi, ‘Lord of the Rings.’ I don’t bungee-jump or anything crazy like that.”

Joining Maltz on stage were Rosemary Minkler on keys and vocals; Adi Meyerson on bass; and Jay Sawyer on drums.

Maltz is visually versatile when it comes to music videos. She can do something barefoot on a coach or can go the artistic route, like in the video for her song “On the Loose,” where she is first portrayed as serene and then shown with black eye makeup to look like a villain.

The video for her song “Kingdom” has the viewer seeing Maltz through a filter to suggest that “you don’t know what you have until it’s gone.” 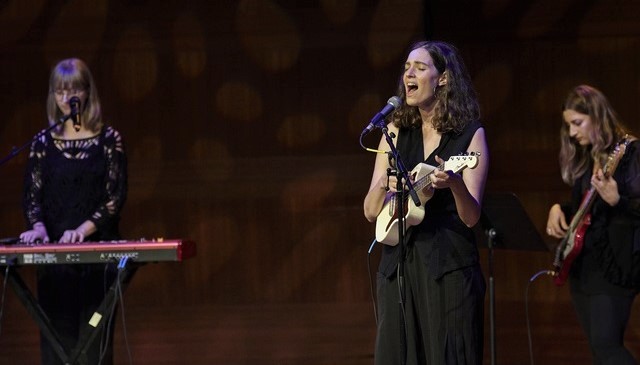 Kari Maltz showed off her voice and musicianship in a concert at the Museum of Jewish Heritage–A Living Memorial to the Holocaust in Battery Park City, N.Y., on Aug.18, 2022. Photo by Perry Bindelglass.

‘A deep sense of purpose’

As wild as it may sound, at one point, Maltz actually considered quitting a career in music.

“It was frustrating,” she said. “It was first hard to get gigs, and you know, people put money into high-tech and spend money on many things. People consume music all the time on their headphones anywhere they go, but often don’t want to pay for it. People don’t realize that a cup of coffee less per month with some money to an artist’s Patreon can make a difference if people do that.”

Still, she said, “I love being on stage. I have a deep sense of purpose. It’s my gift, and I know I have to keep on doing it.”

Most of her songs are in English. But she told the crowd that her Hebrew song “Ma-Asit Kodem” (“What Have You Done Before”) is about uprooting, re-centering and soul-searching. Her tune “Hey Girl,” which she said is a prayer to open the heavens that she wrote on her birthday before moving to New York City, showed off soaring vocals in an opening Middle-Eastern style chant that was hypnotizing. The song evokes the tension of going on a journey of uncertainty.

She said one man in his 60s sent her a video of himself crying because he was so moved by one of her songs.

“Let It Die” is about a breakup. “The world keeps sending us signs,” she crooned, showing no emotion of blame but an understanding of destiny.

She nailed the jazzy feel of “The Nearness of You” by Norah Jones. “Nitnadnedet,” which means swinging on a swing (she was on a real one, asked to do so by a child she was babysitting), is whimsical and fairy-tale-like, literally about life’s ups and downs.

“Did you like that one?” she asked the audience.

No answer was necessary.